Deseret News - ‘It’s too bad it had to end the way it did’: Former Ute sharpshooter Parker...

Parker Van Dyke poses for a portrait in Salt Lake City on Thursday, March 26, 2020. The former East High player and Utah Ute played three games for the Tijuana Zonkeys, of the CIBACOPA league in Mexico, before the league was suspended due to COVID-19. | Kristin Murphy, Deseret News
Former East High product was off to a great start to his professional career in Mexico when play was suspended due to coronavirus pandemic


SALT LAKE CITY — Parker Van Dyke’s professional basketball career got off to a successful start. The former East High and University of Utah star was averaging 13.7 points, 4.3 rebounds and 2.3 assists through three games for the Tijuana Zonkeys of the CIBACOPA league in Mexico. He topped the team in minutes played.

“It was great,” Van Dyke said. “The overall experience was as good as I could have asked for.”

All was well, that is, until the CIBACOPA opted to follow the lead of the NBA and suspend operations indefinitely because of the coronavirus pandemic. It came a day after Van Dyke scored a career-high 18 points in a 90-86 win over La Paz on March 14. He has since returned home to Utah as the virus continues to disrupt nearly all aspects of life.

“It’s too bad it had to end the way it did,” said Van Dyke, who played games on three consecutive nights after two weeks of training camp that included a pair of practices each day and a couple of scrimmages.

The Zonkeys, who opened a brand new arena in Tijuana this season, are coached by former UCLA (1969-72) standout Henry Bibby, who played in the NBA for nine seasons. He later served as head coach at USC (1996-2005) and the WNBA’s Los Angeles Sparks (2005).


“I think the coolest thing about playing for him is when we were first practicing and stuff — while he was coaching — he would tell firsthand stories about John Wooden and Bill Walton. He played for the 76ers, so he would talk about Dr. J,” said Van Dyke, who appreciated hearing about the legends. Bibby played for the New Orleans Jazz from 1974-76 with Van Dyke’s favorite player “Pistol” Pete Maravich. “To have that connection with basketball lore was an amazing opportunity. So that’s one sad thing about this ending for now.

“I could have built a better relationship with him throughout time. I really enjoyed playing for him and he had a lot of confidence in me from the get-go. From the moment he saw me play he wanted me to be on his team.”

Van Dyke added that Bibby showed great trust in him and offered a lot of freedom on the court.

“It felt like we were just clicking. We were just like kind of like starting to click after our third game — moving forward in the season,” Van Dyke said. “So it’s too bad that it ended.”

Although the coronavirus wasn’t a big topic of discussion in Tijuana at the time, Van Dyke and some of his teammates speculated that the CIBACOPA may shut things down in the wake of the NBA’s closure. It took a couple of days — along with the hiatus of Mexico’s top tier of soccer (Liga MX) — for the rumors to become a reality. Schools were closed for at least one month.

Van Dyke and his teammates were notified at a meeting right before a scheduled practice. The CIBACOPA suspended operations until April 20, but the tone of the gathering was that the remainder of the season was over.

Bibby told players he was committed to returning next year and expressed hope that guys would return to the team.

“If they were to start up again in a month I would love to go back. It was like kind of getting punched in the stomach, specifically for me because I waited for five or six months to get an opportunity to play.” — Parker Van Dyke

“If they were to start up again in a month I would love to go back,” said Van Dyke, who noted feeling very sad when team officials announced the suspension of play this season. “It was like kind of getting punched in the stomach, specifically for me because I waited for five or six months to get an opportunity to play.”

If play does resume this spring, Van Dyke would be eager to return. The door is open, he said, but time will tell. The season was supposed to run from March to July. Van Dyke, who has a one-year contract, said he would love to pick up where he left off and play for Bibby and the Zonkeys again.

“It was only three weeks but it was a great three weeks,” said Van Dyke, who enjoyed living in Tijuana and added that it provided him a great adjustment to international basketball life. Even so, he acknowledged it was a bit like an extension of Southern California. San Diego wasn’t too far away.

“I thought it was the best of both worlds where I kind of got a little bit of that feel,” Van Dyke said. “But also it wasn’t a huge culture shock where there was so much American influence.”

During his time in Tijuana, Van Dyke felt safe and secure south of the border. He was able to meet and interact with several people and speaks highly of Zonkeys ownership, management and the fans.

The opportunity to play professionally is something Van Dyke has wanted to do for a long time. He’s told people that his goal in life was to play basketball for as long as he could — focusing first on the transition from high school to college and then to the pros. The latter, though, didn’t really come into play until his senior year with the Utes.

“I kind of regained some passion, you could say, for the game and I realized I don’t want this to end,” Van Dyke said. “As my career at Utah was coming to a close I didn’t want it to be over yet. I felt that my best basketball was actually still ahead of me because I felt like I really hit my stride.”


Van Dyke made his mark in Utah basketball history by hitting a buzzer-beating 3-pointer in a 93-92 win over UCLA at famed Pauley Pavilion on Feb. 9, 2019. It ushered in a key stretch for Van Dyke in terms of leadership and scoring. He averaged 13.8 points over the final eight games of the regular season.

Although pleased with his play throughout that Pac-12 stretch, Van Dyke acknowledges the UCLA game will always be extra special.

“That moment changed my whole life, honestly,” he said. “I’ll always be remembered for that one shot. That definitely gave me a boost of confidence.” 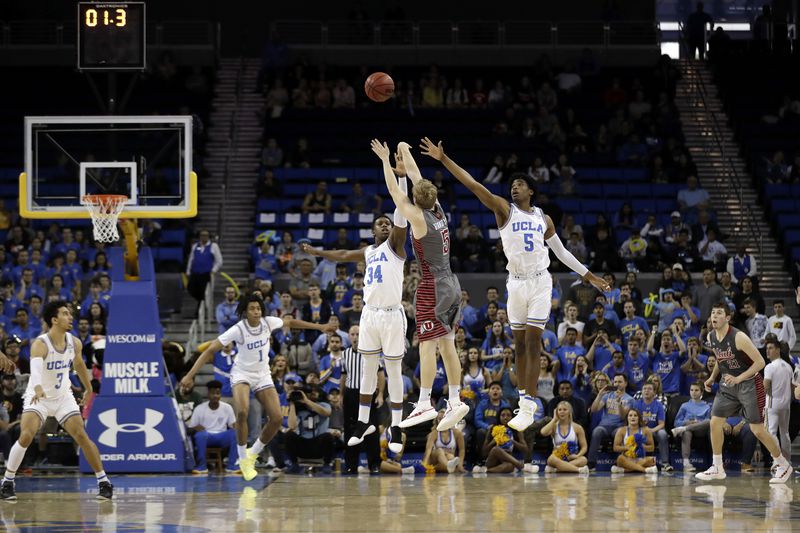 The next week, Van Dyke netted 23 points in a win over Arizona and followed it up with 17 against Arizona State. He had 15 in an earlier victory over the Bruins.

Competing at such a high level, he reasoned, comes in such a short window of time and why not do it as long as possible — wherever that may be.

“I never thought I would be wearing a Zonkeys jersey,” Van Dyke said. “What a great name.”

Pregame introductions before his professional debut solidified his mindset to continue playing basketball. It’s a dream that has come true, even if the season was interrupted so soon.

“It was only three games but I think it’s the start of something special,” said Van Dyke, who is determined to keep playing. “As long as this virus stuff slows down and leagues begin to play, I’ll definitely pursue it again.”

In the meantime, he admitted, there is no other choice as the world combats the pandemic.

“You’ve got to understand it is out of our control. But I definitely understand,” Van Dyke said. “Because, especially in sports, there’s no way of avoiding contact with people.”

Shutting down basketball, thus, had to be done in Van Dyke’s opinion — especially when the NBA did it. He also understands why other sports did so as well, all to help flatten the so-called curve when it comes to stopping spread of the virus.

“The only way you can do that is through kind of social distancing and stuff,” Van Dyke said. “So it is a bummer. It is frustrating. But it is out of our control and you definitely do understand. It does help to know that we’re not the only ones. I think every professional career right now is kind of suffering and every life is suffering a little bit where we can’t really do things that we normally would do.”