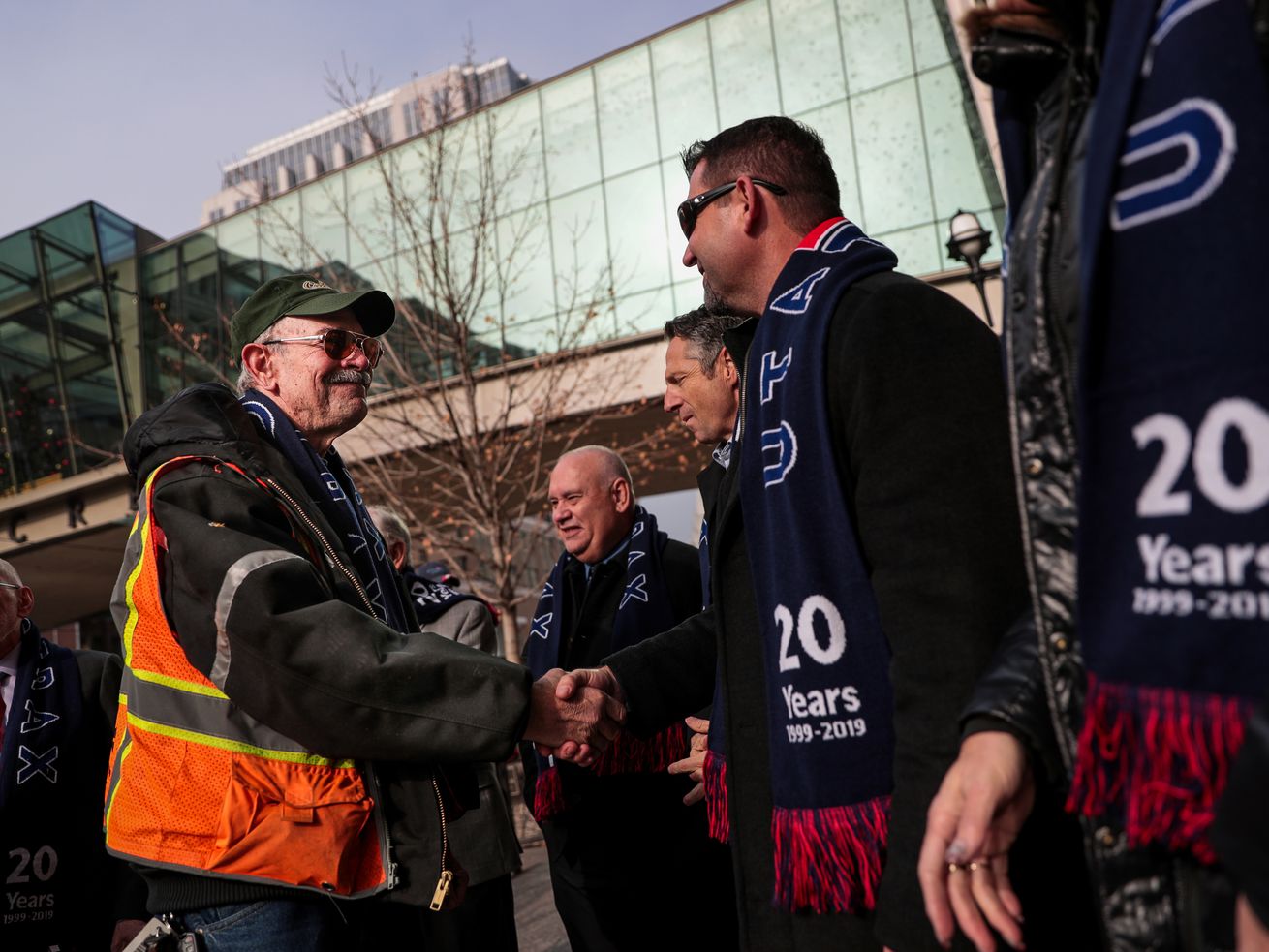 Larry Troost, who has been a line and signal technician for TRAX since it launched, shakes hands with Eddy Cumins, chief operating officer of Utah Transit Authority, during a 20th anniversary celebration of TRAX at the City Center Station in Salt Lake City on Wednesday, Dec. 4, 2019. | Spenser Heaps, Deseret News
SALT LAKE CITY — Two decades ago it was a city flush with excitement, just days away from a massive millennial celebration and only two years out from becoming the epicenter of international sports as host of the 2002 Winter Olympics.

But then-Salt Lake City Councilman Carlton Christensen mostly remembers standing in front of the downtown ZCMI Center on Dec. 4, 1999, to celebrate the opening of the 15-mile TRAX light rail line from Salt Lake to Sandy on a day that was both frigidly cold and fraught with controversies swirling around the massive project.

Christensen, now the chairman of the Utah Transit Authority board of trustees and participating in an event Wednesday held in the very spot where the new $312 million TRAX Blue Line was christened 20 years ago, also noted the TRAX debut marked the start of a transit-driven transformation that would eventually lead to positive impacts on communities up and down the Wasatch Front.

“Twenty years ago on Dec. 4, the first TRAX line from Sandy to Salt Lake opened to the public,” Christensen said. “After decades of planning and not without some initial controversy.

“It was a day — as a young, newly-elected member of the Salt Lake City council — that I could see the future of Salt Lake City changing and how integral transit would be to that experience.”


Since that time, six additional legs of UTA’s TRAX have been completed, growing the system to some 44 miles of routes and 50 stations. The trains operate 362 days a year and have, since launch, carried over 283 million riders to their destinations.

The initial TRAX project was particularly rough on Main Street businesses in downtown Salt Lake City, and a group would later file a lawsuit seeking damages for business impacts they claimed far exceeded what planners had told them before construction began.

And, even before the first Blue Line train was on the tracks, Salt Lake City residents along with city council members stood divided on the alignment of the first installment of a Red Line that would extend TRAX service from downtown up the hill to the University of Utah. While the Utah Department of Transportation pushed back on running the line up the center of 400 South, that option would win out over other possibilities that included following 300 South or putting the tracks to one side or the other of 400 South.

The civic rumblings that followed the early construction projects, which also fell under a cloud of urgency brought on by the slew of preparations deemed critical to be ready to host the 2002 Olympics, are somewhat dimmed by the positive, long-term outcomes spurred by the system. 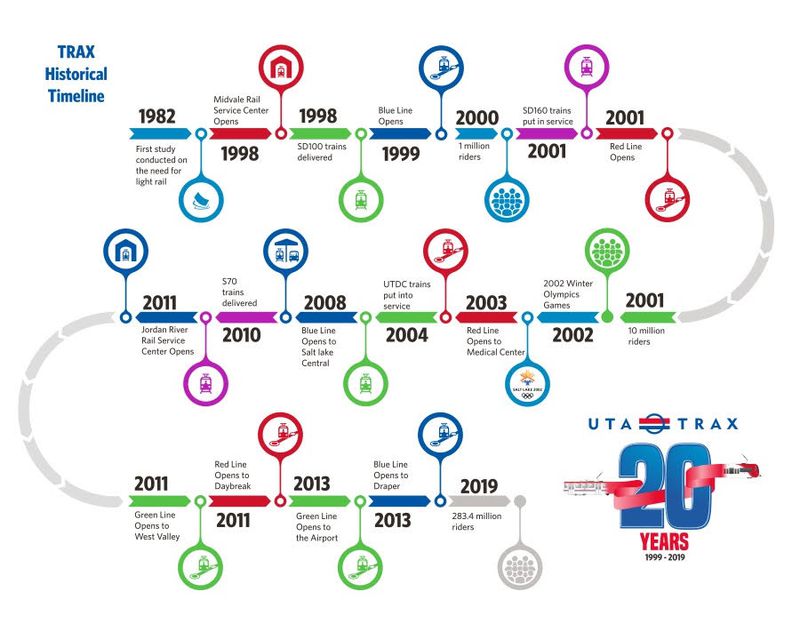 Murray Mayor Blair Camp said the arrival of TRAX proved to be an economic catalyst that continues to bear fruit. He noted the construction of the $512 million Intermountain Healthcare facility near the Murray TRAX stop, and other investments along the line, as evidence that light rail service has raised the economic vitality of his community.

“Some would argue that that’s one of the reasons Intermountain wanted to be there,” Camp said. “Other areas along the TRAX line that were underdeveloped or undeveloped now house nice residential and mixed-use facilities, and there’s more to come.”

Midvale Mayor Robert Hale recounted tales he heard from past city leaders who traveled to St. Louis in the early ’90s to gather information from communities that had, and had not, opted into light rail service. Hale said the Missouri communities that took a pass on rail service were unanimous in their advice to the Midvale visitors: “Whatever you do, get one. It’s worth it.”

Hale said TRAX service has helped put his city on the map thanks to light rail connectivity that can get a passenger from Salt Lake International Airport to Midvale in 30 minutes, and who can then be whisked by bus to ski resorts in either Big or Little Cottonwood Canyons in about another 30 minutes.

“It’s been a marvelous growth opportunity for the center of the valley,” Hale said of TRAX service. “It’s become one of our primary commuting options.”

Further TRAX system expansions continue to be under consideration, with UTA currently conducting an assessment of possible extensions of the Red Line and Blue Line segments south into Utah County. The study was called for as part of efforts to navigate the continued explosive growth, and associated congestion issues, in southern Salt Lake and northern Utah Counties.

“Our population is set to double in the next 30 years and 90% of that population will live along the Wasatch Front,” Miller said. “One of the biggest challenges we face is ensuring that transit infrastructure grows as effectively and efficiently as possible.

“Toward this end, I believe past will be prologue and UTA will continue to lead the way. TRAX and UTA will be an essential part of the vibrant multimodal systems of Salt Lake City and the entire Wasatch Front.”