Deseret News - Looking back: A wild finish, a postgame hug and the dawn of a new era 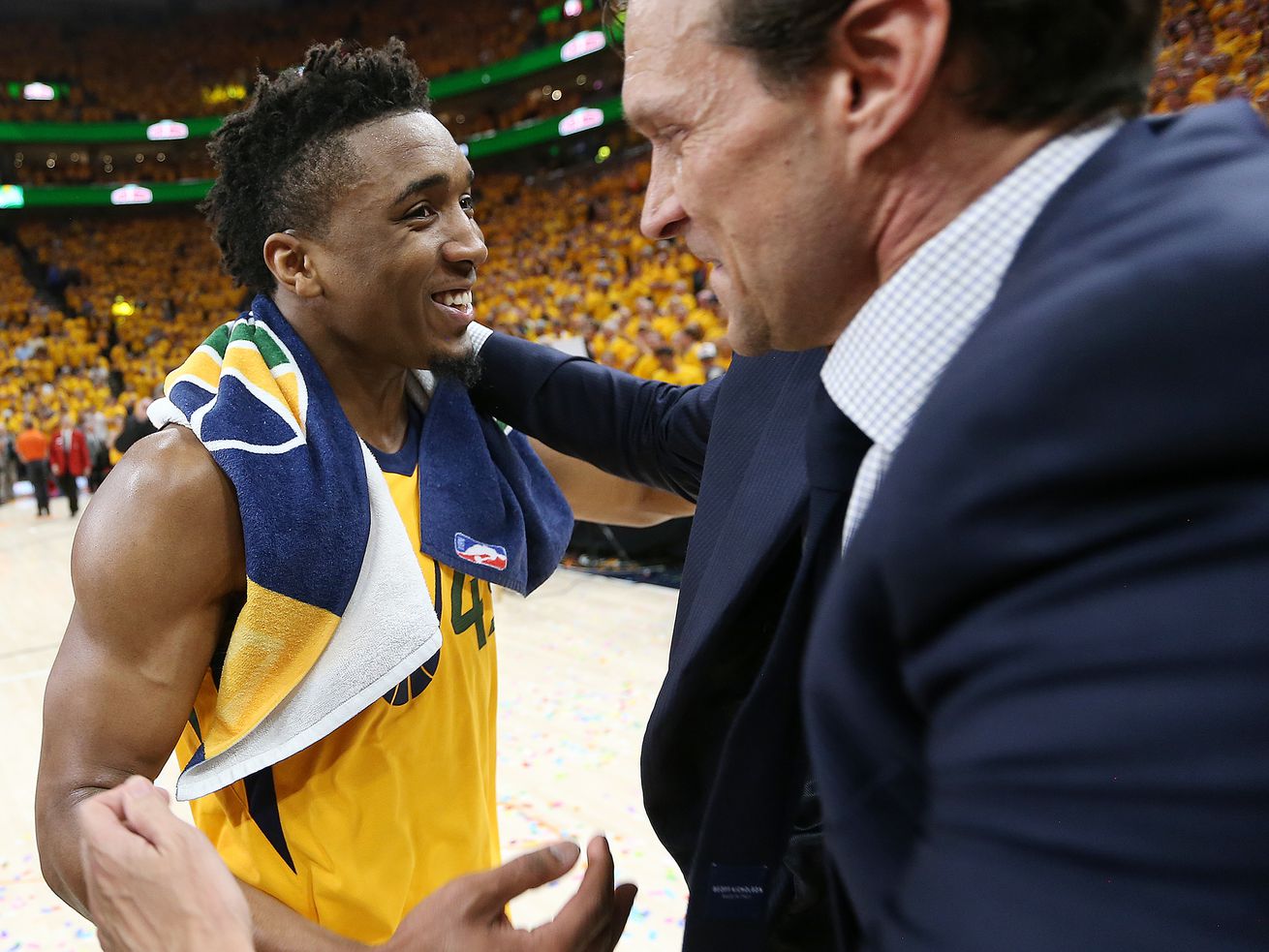 Editor’s note: Fifth in an occasional series reminiscing about games not to be forgotten.

SALT LAKE CITY — Quin Snyder generally holds himself to a high level of decorum in media settings, but that went out the window for the Utah Jazz head coach on April 27, 2018.

Moments after what was the best game I’ve ever covered, which saw the Jazz beat the Oklahoma City Thunder 96-91 in Game 6 of the first round of the playoffs to advance to the Western Conference semifinals, Jazz rookie star Donovan Mitchell was being interviewed by ESPN’s Israel Gutierrez when Snyder barged in and hugged Mitchell tight with both arms.

The hug lasted just two seconds and Mitchell immediately returned to his obligations with Gutierrez, but it was a scene that will long represent the successful culmination of what had been not just a wild game or even an intense series, but a roller coaster 10 months and five days for the entire franchise.


On June 22, 2017, the Jazz acquired Mitchell in a draft-day trade with the Denver Nuggets. A week-and-a-half later, he wowed at summer league, which came at the same time Gordon Hayward held Jazz fans’ attention captive on July 4 before officially announcing he was leaving to play for the Boston Celtics.

That was a crushing blow to a team that had finally returned to the playoffs in 2017 for the first time in five years with Hayward leading the way, and Utah struggled through its first 47 games without him, going just 19-28, even as Mitchell surprised a lot of people by asserting himself as one of the best rookies in the league.

But then a switch was flipped, and the Jazz rode an incredible defense to go a ridiculous 29-6 over the rest of the regular season to earn the No. 5 seed in the West and a series with the Thunder. Just like the year before as the No. 5 seed against the LA Clippers, however, it appeared Utah wouldn’t have enough firepower to contend with Oklahoma City’s Russell Westbrook, Paul George and Carmelo Anthony.

In an unexpected turn, however, Utah took the next three games to take control of the series. The Jazz clamped down defensively, as the most points Oklahoma City scored in any of those contests was 102. Ricky Rubio’s unexpected triple-double in Game 3 will go down as one of the best single-game playoff performances in Utah’s postseason history.

Then there was Game 5 in Oklahoma City. The Jazz led by 25 points with 8:21 remaining in the third quarter, well on their way to the series win before falling apart. The Thunder outscored Utah 32-7 the rest of the quarter to tie the contest heading into the fourth, and ultimately won 107-99.

Suddenly, there was a feeling the Jazz had to win Game 6 in Salt Lake City, as a Game 7 on the road against a bunch of All-Stars didn’t seem great, especially because it would have meant Oklahoma City would have all the momentum after winning two games in a row to tie the series.

Mitchell (remember, he was still just a rookie), though, guaranteed a Utah victory in Game 6 as he exited the court at the end of Game 5, yelling to a Thunder fan, “We’ll see y’all next year.”

So the stage was set for Game 6 at Vivint Arena. Weirdly, the first thing I heard as I approached the building that day was the Imagine Dragons song “Thunder.” Not a great omen for Utah? Each seat had draped over it a bright yellow T-shirt, and there was a unique energy, even for a place that is known for its incredible atmosphere during the playoffs.


Arrived on the plaza at The Viv and literally the first song I heard being played was Imagine Dragons' "Thunder."

— Ryan McDonald (@ryanwmcdonald) April 28, 2018​
Both teams got off to a slow start, with Oklahoma City holding a 22-18 lead after the first quarter, which saw Rubio have to leave the game because of injury. The Thunder led by as many as nine in the second but by halftime, it was knotted up at 41.

Then in a remarkable stretch, Mitchell, who had a modest 10 points at intermission, scored the Jazz’s first 10 points of the third quarter, and Utah led by five. The Jazz led by as many as 12 in the third and held an eight-point edge heading into the fourth. Mitchell scored 22 points in the frame and Westbrook countered with 20 in an incredible duel.


How many points have you scored in the opening minutes of this quarter, Donovan? pic.twitter.com/nu0yLFD0s8

Was that an MVP! chant from The Viv crowd?

The Jazz’s next possession wasn’t going anywhere when Mitchell passed the ball to Derrick Favors about 18 feet from the hoop with six seconds left on the shot clock. It wasn’t the best opportunity, but Favors rose up and sank the jumper to stretch the lead to three with 1:08 to go.


On the ensuing possession, Westbrook drove in for a layup attempt that missed, but the Thunder came up with the loose ball. That would happen a whopping four more times over the next 39 seconds as Utah couldn’t get a defensive rebound.

The last one, with 22 seconds left, came when George faked a shot from behind the 3-point line to get Rudy Gobert in the air. George leaned in to create contact, but no whistle blew and the shot was an airball. Mitchell rebounded it with 19 ticks on the clock.

The craziness still wasn’t over, as the Jazz made a series of rather risky passes to avoid getting fouled, and almost turned the ball over on multiple occasions. Mitchell was eventually fouled with 6.9 seconds left and made both free throws for his 37th and 38th points of the night to put Utah up 96-91, and Oklahoma City got no closer.


THAT WAS SOME DICEY PASSING TO TRY DRAINING THE CLOCK

— Ryan McDonald (@ryanwmcdonald) April 28, 2018​
As the buzzer sounded, the crowd went nuts, confetti rained down from the ceiling, Mitchell raised his arms in celebration, Westbrook went to the locker room and Snyder circled around to hug a bunch of his players. When he met Mitchell, the pain of losing Hayward 10 months previous was officially gone and a new course of Utah Jazz basketball was being charted.