Deseret News - Runnin’ Utes leave their defense on the road, get routed by UCLA as key homestand begins in forgettable fashion 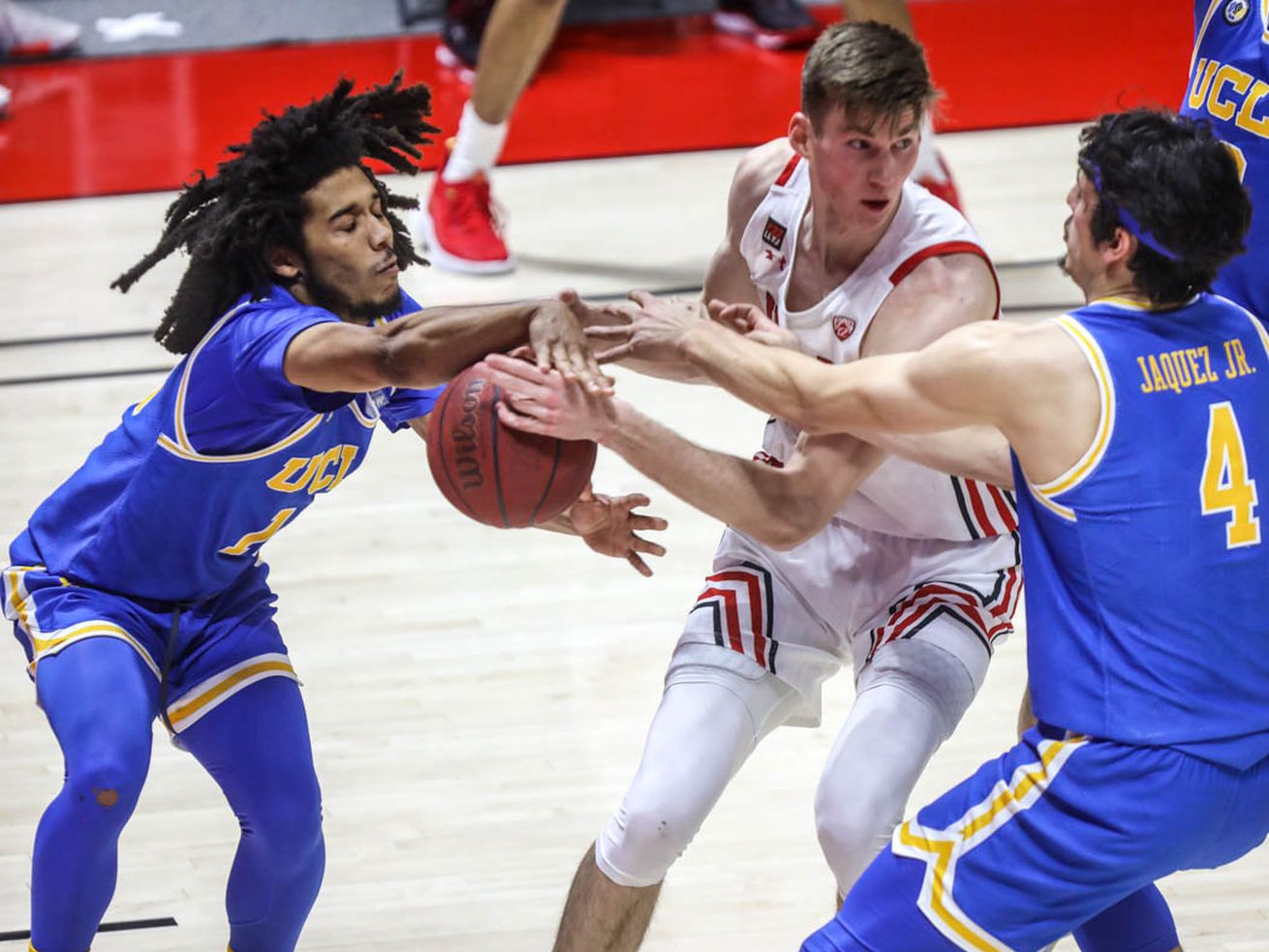 Visiting Bruins shoot better than 50% from the field and the 3-point line and hand Utah its fourth-straight loss. For the first time in program history, Utah doesn’t attempt a free throw

The Runnin’ Utes got one key player back Thursday night, but it really didn’t matter all that much. A couple players from the Utah Jazz probably couldn’t have helped Utah slow down hot-shooting UCLA at the Huntsman Center.

Not when the NCAA Tournament-bound Bruins are getting any shot they want, and making most of them. UCLA shot 55% from the field and 58% from 3-point range — even after cooling off in the final few minutes — and buried Utah 76-61 in a game that was never really in doubt.

So the Utes’ big homestand, seen as a chance to garner some much-needed late-season momentum before March, opened with a thud. Or the sound of another UCLA 3-pointer swishing through the Huntsman Center nets. Take your pick.

Utah’s defense, which has generally been stellar this season and kept blowouts to a minimum, didn’t show up in the first of two games against the top teams in the Pac-12. And when the Utes are missing starter Mikael Jantunen — still quarantining after Finnish national team duty — and Rylan Jones is still rusty after sitting out the last four games with a bum shoulder, the outcome is predictable for a team with no margin for error.

“We had a little bit of give-up in us, which can’t be part of our identity. That’s not unusual when a team is clicking at such a good offensive pace (like UCLA was). It gets a little hard, puts pressure on your offense when you come down and you are taking the ball out of the net all the time. We put our guard down. And we’ve got to be dialed.” — Utah basketball coach Larry Krystkowiak

Making matters worse, coach Larry Krystkowiak intoned that the Utes’ effort, which hadn’t waned through the three-game losing streak, even when Oregon State was beating them by 18 a week ago, was lacking when the Bruins pulled away in the second half.

“We had a little bit of give-up in us, which can’t be part of our identity,” Krystkowiak said. “That’s not unusual when a team is clicking at such a good offensive pace (like UCLA was). It gets a little hard, puts pressure on your offense when you come down and you are taking the ball out of the net all the time. We put our guard down, and we’ve got to be dialed.”

Later, Krystkowiak clarified that he wasn’t really saying the Utes quit. UCLA opened the second half on a 19-7 run, and that took the wind out of Utah’s sails, he noted.

“I thought our guys looked like they hit a wall a little bit,” he said, “and those guys are stepping up and making plays. I never really thought our guys gave up, but it just puts so much pressure on you. There were times when we had great defensive effort. We got them to miss. There were also times we had great defensive effort and concentration, and they scored, and that is where that line gets drawn.”

With Jones’ minutes limited — he had seven assists and no turnovers in 17 minutes — and Jantunen missing his fourth game, Krystkowiak turned to his bench often, with mixed results.

“Where we really struggled tonight is we had some lackadaisical moments,” Krystkowiak said, “and it is not a quit thing. I would never say our guys quit. It just puts such a strain on you that it is hard to play when you can’t find any momentum. You’ve got to be able to get stops.”

And the Utes couldn’t. Four Bruins reached double figures, led by Jules Bernard with 19, Johnny Juzang with 18 and Cody Riley with 15. Those three were a combined 21 of 32 from the field. Bernard and Juzang were both 4 of 6 from beyond the arc.

Offensively, the Utes didn’t play that poorly. They shot 45% from the field and 43% from 3-point range (9 of 21). They committed just nine turnovers and gave up only five offensive rebounds, three in the final minutes.

But they got just eight points on 4 of 13 shooting from star forward Timmy Allen and never went to the free-throw line. Not once. UCLA was 3 of 4 from the stripe, as referees let both teams play. Only 17 fouls were called.

It was the first time in Utah basketball history that the Utes have not attempted a free throw in an entire game.

“I don’t know if I have ever coached a game where we haven’t shot a free throw, so that was a little bit odd,” Krystkowiak said. “But I thought we were playing the game the right way. They are a good defensive team, a physical team, and we did some things that were positive — low turnovers, battled even on the glass, shared the ball. We just need to make more shots.”

Actually, the Utes (9-11, 6-10 Pac-12) played well defensively the first 12 minutes of the first half and the last 12 minutes of the game. It was the time in between that doomed them to their fourth straight loss and kept them from staying as close to UCLA as they did Dec. 31 at Pauley Pavilion, when they lost by just two points.

The Utes were right there most of the first half but failed to score the final three minutes, 21 seconds of the half, and UCLA went on a 6-0 run to take a 35-27 lead at the break.

In the second half, UCLA extended its run to 13-0 before Riley Battin stopped Utah’s bleeding with a bucket inside. The Bruins jumped out to a 51-32 lead before Krystkowiak got a timeout.

Utah cut it to 63-49 with a 10-3 run, but after a UCLA timeout with 7:42 left, Jaime Jacquez hit a pull-up jumper and Bernard hit long 3-pointer and the visitors were back in control.

Utah assisted on 10 of its 12 field goals in the first half, while the Bruins assisted on just 6 of their 14 and finished the game with just 13 helpers on 31 field goals.

However, their isolation game was just too much for Utah handle.

“Our point of attack defense, I thought was lacking,” Krystkowiak said. “… They don’t miss many open shots.”

Especially when they are getting every they want offensively.