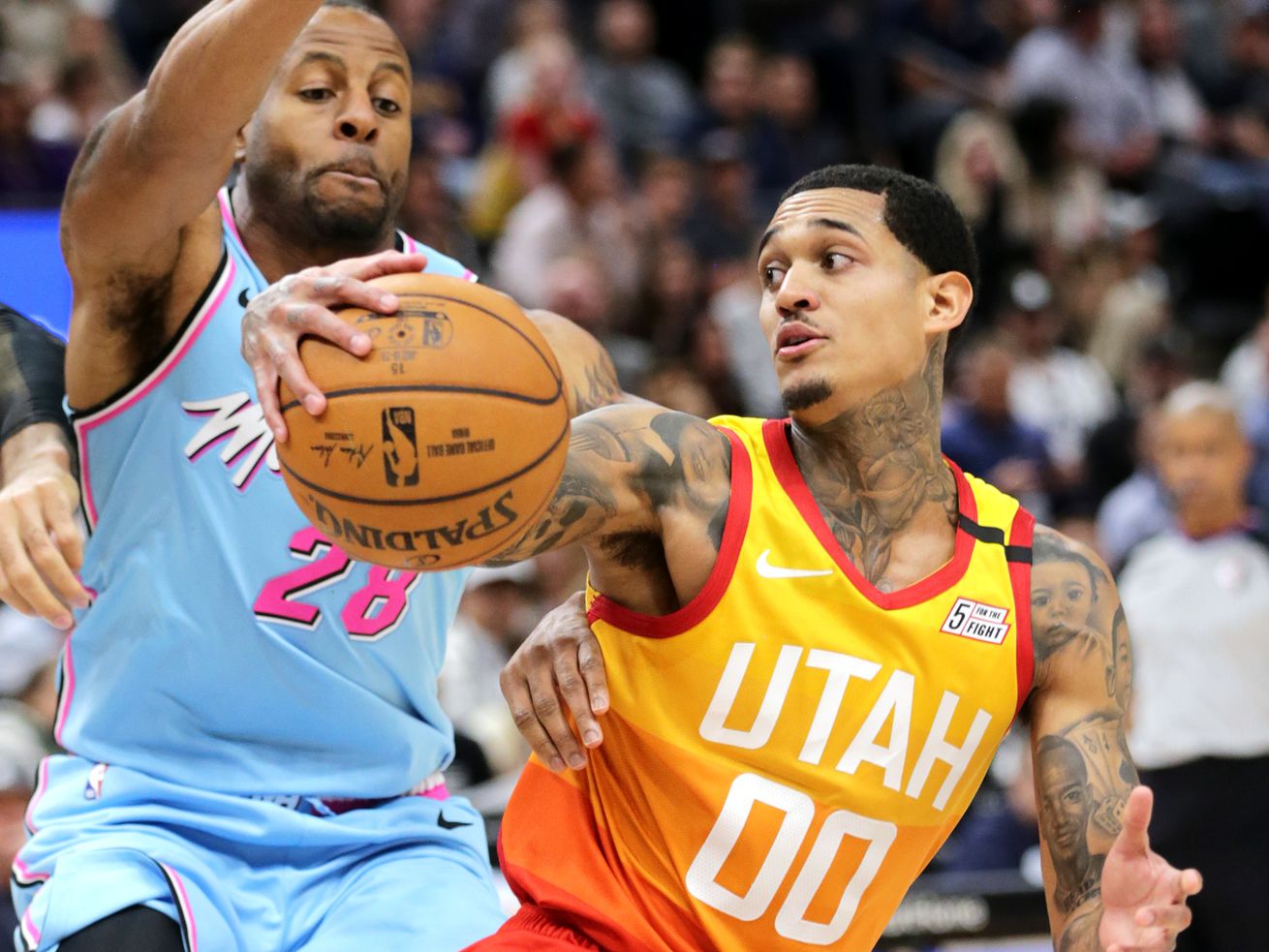 SALT LAKE CITY — The Utah Jazz and the NBA community have not stayed silent following the death of George Floyd and protests that have taken hold in nearly ever major U.S city since.

Multiple NBA players and their families have shared their feelings, reactions and messages via social media and have even taken part in protests against racial injustice.

On Saturday, Jazz guard Jordan Clarkson was at a protest in Los Angeles and later shared photos on Twitter.

“I witnessed a peaceful protest, a lot of emotion and unity,” he said. “The time for change has been passed due..don’t forget the message because of the tone that it is projected in!!”


i witnessed a peaceful protest, alot of emotion and unity, the time for change has been passed due..dont forget the message because of the tone that it is projected in!! pic.twitter.com/a0SkOgiT5F

— Jordan Clarkson (@JordanClarksons) May 31, 2020​
Clarkson was one of many NBA players to attend protests across the country on Saturday, including the Minnesota Timberwolves’ Karl-Anthony Towns, the Philadelphia 76ers’ Tobias Harris and the Boston Celtics’ Jaylen Brown.

“Twenty-eight years ago, as a white woman getting married to an African-American former Air Force sergeant, I had no idea that I would have a front-seat window to the disparaging acts of racism that would plague his community on a daily basis,” she wrote. “Together we have watched countless murders of innocent black people, him with a lens of fear and anger. Me with a lens of hopelessness.”


https://t.co/JU4OTXLzDa
My mom, who has her PhD in Human Services (and is white) wrote this article today! It addresses the role that white people, and all races, can play in helping change our current social climate. THIS is why my mom is my hero! Plz share and RT

— Nigel Williams-Goss (@NigelWG5) May 29, 2020​
Jazz stars Rudy Gobert and Donovan Mitchell both aired feelings of disgust and anger after video surfaced of Floyd, who later died, being detained by a police officer who knelt on Floyd’s neck for nearly 10 minutes on Monday.

The officer, Derek Chauvin, was taken into custody on third-degree murder and manslaughter charges Friday.

Gobert retweeted the video of the incident saying, “If you let your coworker do that to another human being without trying to stop him or talk to him out of it, you are as guilty as he is. Frustrating for the majority of good cops that take a lot of risk doing their job the right way everyday.”

On Wednesday Mitchell tweeted a photo of actor Will Smith with the quote “racism is not getting worse, it’s getting filmed,” a sentiment Smith shared on “The Late Show” with Stephen Colbert in 2016. Mitchell captioned the photo saying, “I woke up this morning and saw this! So true.”

Mitchell, who has continued to share his thoughts on social media and retweet posts from others over the last few days, reacted on Saturday to video of a man who showed up to the Salt Lake City protest with a bow and arrow during a confrontation with protesters.

“This is sick,” Mitchell wrote on Twitter. “Just the thought is sick... shooting bow and arrows at protesters.”


I woke up and saw this! So true pic.twitter.com/rHsdt2TAGi

— Donovan Mitchell (@spidadmitchell) May 27, 2020​
Mary Conley, wife of Jazz guard Mike Conley, shared a post on Instagram saying that she needs to speak up in order to make a difference.

“I am ashamed that this behavior continues in our country,” Conley wrote. “Being married to a black man and raising black sons has me in more fear than I ever imagined. Racism happens in more ways than we realize, it’s not all on the news but it’s happening every day.”

“White people as a race ARE NOT the problem,” Tucker said. “RACISM is the problem, don’t put a stigma on the whole race because of a few ignorant people! But this HAS TO be dealt with in one way or another.”


White people as a race ARE NOT the problem. RACISM is the problem don’t put a stigma on the whole race because of few ignorant people ! But this HAS TO be dealt with in one way or another

— Rayjon Tucker (@th3flighttuck) May 30, 2020​
Many NBA teams and executives released statements over the weekend, including Charlotte Hornets owner and Hall of Fame player Michael Jordan, who in 2016 made a similar statement and contributions of $1 million each to the International Association of Chiefs of Police’ Institute for Community-Police Relations and the NAACP Legal Defense Fund.

“I am deeply saddened, truly pained and plain angry,” Jordan said in a written statement. “I see and feel everyone’s pain, outrage and frustration. I stand with those who are calling out the ingrained racism and violence toward people of color in our country. We have had enough.”