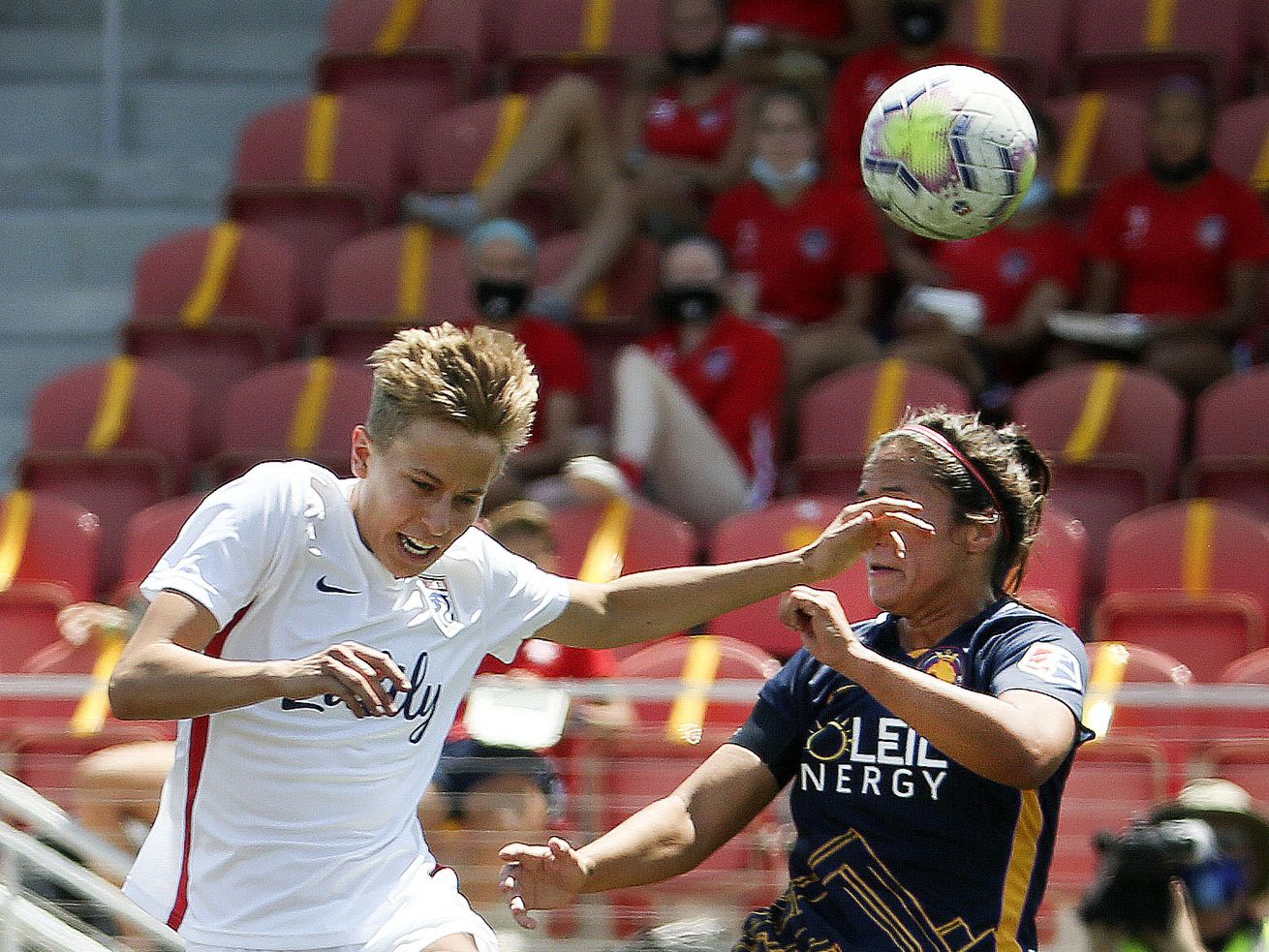 OL Reign player Quinn (5) and the Utah Royals’ Taylor Leach (24) compete for the ball in a 2020 NWSL Challenge Cup game at Zions Bank Stadium in Herriman on Wednesday, July 8, 2020. | Laura Seitz, Deseret News
All the way back on Jan. 6, Utah Royals FC announced the signing of center back Taylor Leach, who had played the previous four years in Sweden.

Four days later, she posted on Instagram, “So blessed and excited to join the wonderful organization of the Utah Royals FC!” Then on March 11, the day Utah Jazz center Rudy Gobert tested positive for COVID-19, she posted, “New team. Same grind.”

Of course, the 2020 season has been a completely different grind, as the National Women’s Soccer League, like other leagues around the world and especially in the United States, has been totally altered in the way it functions.

Having been halted just a few days after preseason training began, the NWSL was reduced to two chunks of gameplay that will equal just nine games for URFC this season as opposed to the minimum of 24 if it didn’t make the playoffs.

As if that wasn’t crazy enough, URFC has also dealt with incredible organizational turmoil as allegations of racism and sexism have rocked the group, which is being led by interim head coach Amy LePeilbet while Craig Harrington is on leave of absence after coaching just five games since being hired in February.

The 2020 season for URFC will finally come to a close Saturday when it faces Washington-based OL Reign on the road in the final contest of its four-game Fall Series.

“It’s been very hard, but we’ve all come together as a group, as a team, as an organization and have done the best we could,” Leach said earlier this week. “I think for me, it’s something that I can look back on and know that we did everything we could and now just hopefully moving forward to something better coming 2021.”

As much as there might be a tendency to look forward to next year when things may be a bit more as they were when Leach arrived in Utah, both she and fellow defender Katie Bowen said the group has been solely aimed at finishing 2020 on a good note Saturday.

“That’s where our main focus has been, and I think once that happens, then those conversations (about next year) will start to come to life and people will start talking about those a little bit more, but I think for right now, we’re really focused on this next game against OL Reign,” Leach said.

Bowen, in a lot of respects, feels as though Saturday will be more of the continuation of the process of getting better as a team rather than the final go-round for the year.

“I think we’ve seen slow progression and improvement in our team throughout (the last three games), so I think just kind of taking those steps forward hoping to get the three points but I think ultimately just trying to execute the game plan that we put in place and just making sure that we see improvement,” she said.

Leach also noted the improvement the team has made since the Fall Series began with a 3-0 loss to the Portland Thorns on Sept. 20, as URFC has come away with draws in its last two contests, including a 2-2 draw against the Reign on Sept. 26 at home.

“We’ve just progressed and progressed as a group,” Leach said. “I think we’ve built on something that (LePeilbet) was able to start and bring to the table, and we’ve just gone with it.”