SLC Dunk - Rudy Gobert is ready to dominate the league 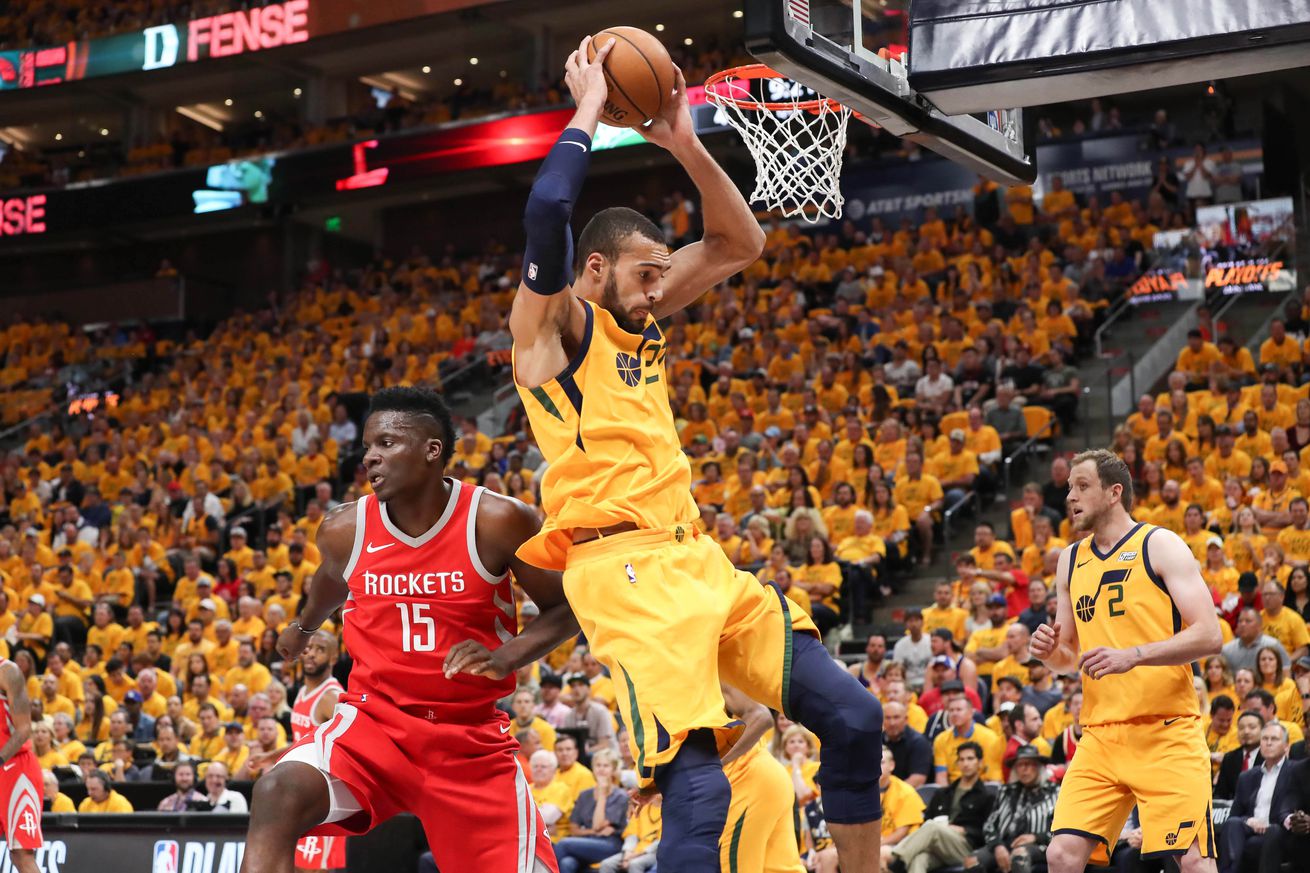 Defensive Player of the Year was only the beginning

With two preseason games down it’s hard to draw too many conclusions about the Utah Jazz. But one thing has been very clear, Rudy Gobert is about to dominate the league.

Against the new look Toronto Raptors Gobert was special. In 25 minutes he scored 13 points, grabbed 10 rebounds and blocked 5 shots. He was also 5/6 from the free throw line. Against Perth he was beyond good making it seem at one point they might not ever score. I’m not kidding. Halfway through the first quarter they still had zero points.

But on the offensive end, Gobert is already showing some interesting nuances to his game. The Jazz are feeding him near, and sometimes even under, the basket. These last two games Gobert has been able to use his strength to go up for easy lay-ins.

Against Perth that seems like an easy shot because of the obvious size advantage. But early in the game against Toronto Gobert was able to muscle his way to the rim. If this trend continues, Gobert has a chance to not only add a few points to his average but add a wrinkle to the Jazz offense that should produce more spacing.

— NBA (@NBA) October 3, 2018​
With this added nuance to his game, coupled with Rudy being a constant lob threat, the Jazz offense is going to improve greatly.

It was Joe Ingles Birthday yesterday and he celebrated it with 24 points and a W against the Toronto Raptors.

— NBA (@NBA) October 2, 2018​
It was a slow start for Joe who missed the previous game with leg soreness. But in the third quarter Ingles exploded rallying the Jazz to victory with two big time threes.


Joe Ingles records 24 PTS on his birthday and earns the W for the @utahjazz! #NBAPreseason pic.twitter.com/mEhsM0TNH8

— NBA (@NBA) October 3, 2018​
Ingles is already showing some improvement to his game as well, hitting a floater that he had worked on last year. It’s a wrinkle that makes him even tougher to guard in the pick and roll.

Kawhi Leonard provided some in depth analysis about Ingles and what hes brings to the table.


Jazz sharpshooter Joe Ingles turns 31 today. He has the respect of Raptors’ Kawhi Leonard. “He’s been doing a great job of working on his game,” Leonard said. pic.twitter.com/6VR709j5Is

— Eric Woodyard (@E_Woodyard) October 2, 2018​
Joe Ingles had similar analysis of his own game.

— NBL (@NBL) October 3, 2018​
Ingles is literally the best shooter in the league and at interviews. If we’re being honest, at everything.

The Utah Jazz are in good shape in terms of team chemistry and in the salary cap. Here’s an interesting pie chart from Hoops Hype showing the Jazz cap situation.


The salary pie for the Utah Jazz pic.twitter.com/JSVrNQaHKu

— HoopsHype (@hoopshype) October 1, 2018​
There’s some interesting pieces of the pie. The first thing you notice is the bargain that is Donovan Mitchell’s contract, arguably the best in the league.

You also notice that the Jazz have some big expiring contracts. If the Jazz are in the running for a big free agent next offseason, half of that pie can be removed to make room.

Roll your eyes, but this team has a chance to be really watchable: X’s-and-O’s nuance for the nerds, a whole bunch of sneering nasty, and as many as eight rotation wings -- perfect for sleek, modern NBA lineups.

The best basketball emerges when a team with an intricate system finds a star who can exist both within and outside of that system. That is happening in Utah with Donovan Mitchell. He can fit in Utah’s machine of cuts, screens and handoffs -- and then bust out of it to toast some poor sap on a switch (hi, Melo!) when an elite defense short-circuits that machine.

Gobert is the system on the defense. He barricades the lane, arms spread, a gladiator daring anyone to challenge him. If someone yams on him -- it happens -- that only emboldens Gobert to swallow that guy whole next time.

Joe Ingles and Grayson Allen might become the league’s prime agitator tag-team -- Ingles with knifing trash talk, Allen with “accidental” leg sweeps. Ricky Rubio reinvented himself, and injected the league’s slowest team with much-needed pace -- including as a part of a lethal small-ball closing lineup.
​
This season is shaping up to be one of the best yet and it hasn’t even started!

Rookie initiations are alive and well with the Utah Jazz and Grayson Allen who sang happy birthday to Joe Ingles.

— Tony Jones (@Tjonesonthenba) October 2, 2018​
This interview is fantastic with Allen not for his insight about the game but for Joe Ingles in the background making demands for the rookie to do things like wash his car.

— Tony Jones (@Tjonesonthenba) October 2, 2018​
Seeing Allen embrace the friendly ribbing is nice and shows he’s got a personality that should fit in nicely with the team.