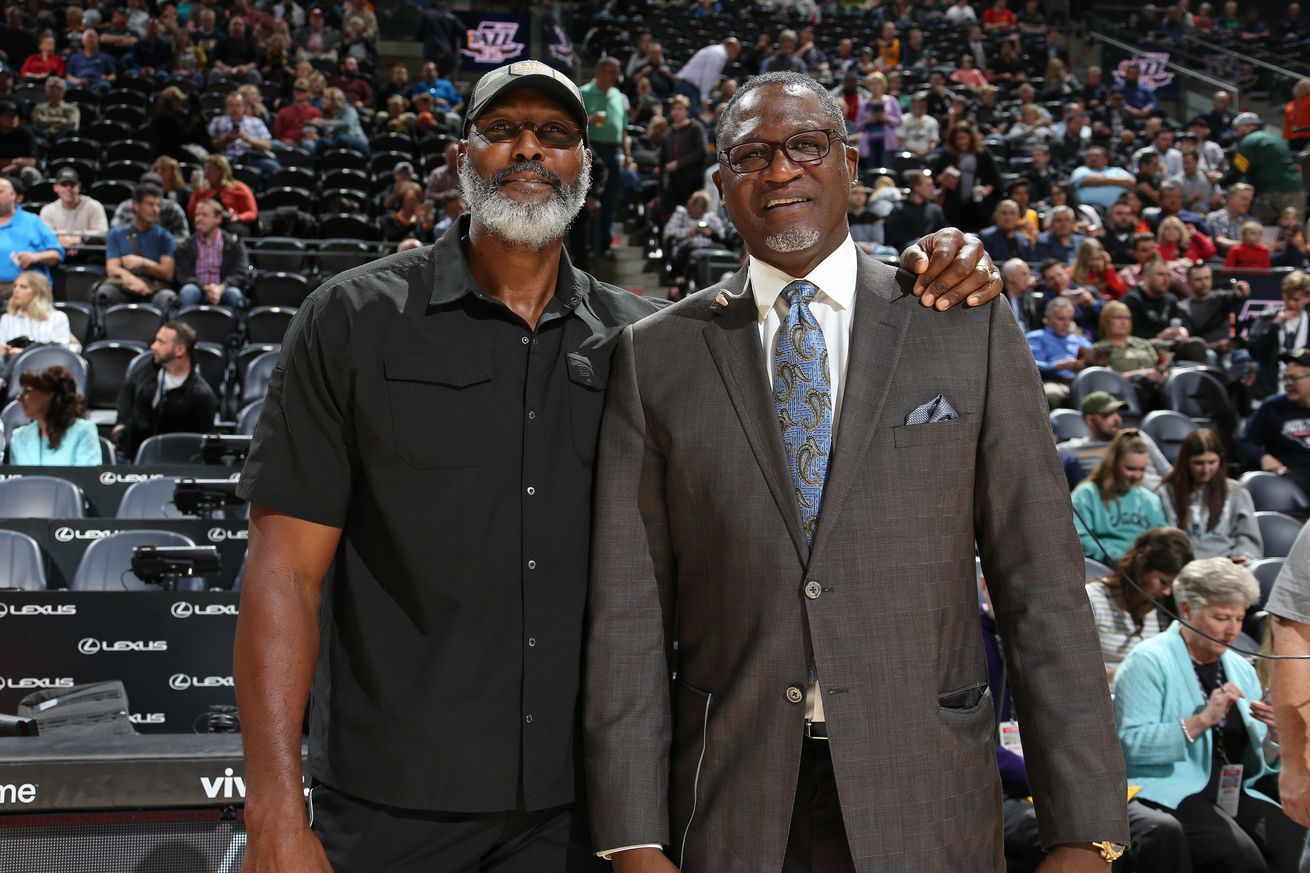 After spending a Wednesday afternoon watching the most recent episode of ‘Marvel’s What If...?’, my mind began to wander. The show’s premise is that of small decisions or events causing massive changes, creating alternate universes in which history plays out completely differently. Naturally, my thoughts went to the Utah Jazz. What seemingly small decisions created massive chain events in Utah Jazz history? What could have happened if just one small thing had been changed?

This might be the first scenario most Jazz fans will think of. The Utah Jazz drafted Dominique Wilkins 3rd overall in the 1982 NBA Draft. He never played a game for the Jazz, as he informed them he had no desire to play in Utah. He was traded to the Atlanta Hawks for John Drew, Freeman Williams, and $1 million in cash. Wilkins went on to have a Hall of Fame career, racking up 9 All-Star appearances, 7 All-NBA nods, and a scoring title.

What if the Jazz decided not to trade him? Sharing the court with Adrian Dantley might not have been the most natural fit, and he likely would have gotten fewer touches as a rookie, but Wilkins would have earned plenty of minutes and touches very quickly. Wilkins was averaging 30 points per game by his fourth season in Atlanta. He would have blossomed similarly in Utah, and the Jazz would have been a better team. The big question then becomes, do the Jazz become too good in his first couple of seasons?

The 1984 and 1985 NBA Drafts were when the Jazz selected John Stockton and Karl Malone. Utah picked them 16th and 13th overall, respectively. The Jazz in the early ’80s were a mediocre team, winning 41-45 games per year, earning draft picks in the teens. If Wilkins had joined forces with Adrian Dantley, Darrell Griffith, Rickey Green, and the Jazz, would they have won too many games to receive those picks? I think they would have. That team was on its way up from the bottom of the league. Another weapon like Dominque would have been massive for the Jazz. Keeping Wilkins would have made it highly unlikely that Utah ever drafts John Stockton or Karl Malone.

But, just for argument’s sake, what if Malone and Stockton somehow did end up joining The Human Highlight Film in Utah? Well, Dominique answered that question himself in a 2018 interview with Eric Woodyard; “Playing with Stockton and Malone, we probably could’ve won a few championships,” Wilkins said. “Not probably, we would’ve, but again, things happen in life for a reason, and you’ve got to take what cards are dealt...”

What if the Jazz had kept the Magic Johnson pick?​

Yes, the Utah Jazz originally held the pick that landed Earvin “Magic” Johnson. On August 5, 1976, the New Orleans Jazz traded three 1st round draft picks and one 2nd round draft pick to the Los Angeles Lakers in exchange for one 1st and one 2nd. This trade was arranged “as compensation” for Utah signing veteran free agent Gail Goodrich away from the Lakers on July 19, 1976. In those days, league rules provided compensation for teams who lost veteran free agents. Well, as luck would have it, one of those three 1st round picks that went to the Lakers ended up being the 1st overall pick in the 1979 NBA Draft. With that pick, the Lakers selected Magic Johnson. 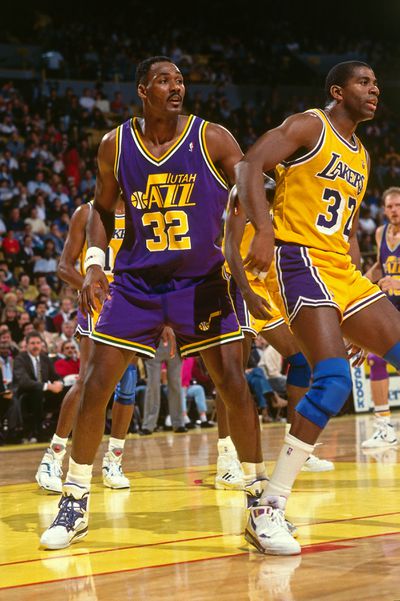 What if this trade had never happened? Gail Goodrich played 182 games for the New Orleans Jazz and averaged 14 points per game. The Jazz had a losing record in each of those seasons. It’s safe to say that Goodrich wouldn’t be too missed in franchise history. That’s not meant as a slight to Goodrich; he simply didn’t have a tremendous impact on the franchise.

Magic Johnson, however, would have changed everything. Johnson is one of the best to ever play the game. From the moment he stepped on an NBA court, he was a superstar. He would have joined a New Orleans Jazz team in the middle of some serious changes. That season included many huge moves, including trading Spencer Haywood to the Lakers for Adrian Dantley, trading Rich Kelley to the Nets for Bernard King, and waiving Pistol Pete Maravich. Would Utah still have made those moves if they had just drafted Magic Johnson 1st overall?

Of course, we can’t see the alternate reality in which Magic Johnson played for the Jazz, so we don’t know exactly what would have happened, but we can guess. I’d think that both the Dantley trade and the King trade still happen. The Lakers were disappointed with Dantley’s decreased production since joining them and wanted a strong role player in exchange. The Jazz would have still had interest in both Dantley and King, as they were both in their early twenties at the time and would have fit Johnson’s timeline. King likely still would have struggled in his short time with the Jazz and moved on right away, leaving the Jazz as a franchise new to Utah, with a bright future, boasting two young stars in Dantley and Johnson.

From that foundation, Jazz history would be drastically changed. There’s no way to predict who would have joined forces with Magic and AD, but that’s a core that could have won multiple titles.

What if Gordon Hayward had stayed?​

The summer of 2017 was very eventful in Utah. After a slow rebuild, Utah had begun to see the fruits of their labors. The Jazz were coming off a 51 win season and a first-round series win. However, Utah’s All-Star and leading scorer, Gordon Hayward, was a free agent.

The Jazz leadership desperately wanted Hayward to stay, as did Jazz fans. Unfortunately, that didn’t end up happening. After a long and drawn-out free agency, Hayward eventually signed with the Boston Celtics.

Before we get into the scenario in which Hayward stays, let's first look at what would happen if he still chose Boston, but he made his decision quicker. Hayward’s now-infamous indecision cost Utah multiple opportunities. Most notably, Utah was in serious talks with All-Star point guard Kyle Lowry. According to the Salt Lake Tribune, “the Jazz spoke extensively to Toronto point guard Kyle Lowry’s representatives about bringing the All-Star point guard to Utah. After those discussions, the Jazz felt confident about their ability to land Lowry but chose to pull out of any potential deal because signing Lowry would have required cap space earmarked for the Hayward.”

In other words, Utah could have landed Lowry, but they decided to hold onto that cap space for Hayward instead. If Hayward had informed Utah of his decision early in free agency, Utah could have begun the 2017-18 season with Kyle Lowry rather than Ricky Rubio. Would a team of Lowry, Donovan Mitchell, Joe Ingles, Jae Crowder, and Rudy Gobert get past the Rockets?

Now, what if he’d stayed? Utah had just drafted Donovan Mitchell, who turned into a star in his first season. Utah would have begun the season with Ricky Rubio, Mitchell, Hayward, Ingles, Derrick Favors, and Gobert. In this reality, Hayward could still be on the team in 2020-21. The Mike Conley trade could still feasibly have happened, although the Bojan Bogdanovic signing likely wouldn’t, as there wouldn’t be cap space for him. 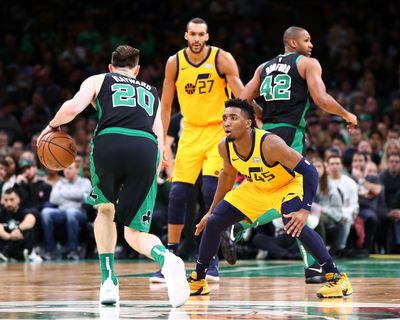 The Jazz of the last two seasons could have boasted a core of Conley, Mitchell, Hayward, and Gobert. Four All-Stars. In this reality, Utah would have had two really great chances at titles in 2019-20 and 2020-21.

What if the Utah Jazz had drafted Tony Parker?​

Ok, I’ll preface this. Every year there are star players that are drafted lower than hindsight tells us they should have. Every team has a long list of superstars that they could have drafted had they known the future. We could ask, what if Utah drafted Kawhi Leonard or Giannis Antetokounmpo? The reason I include this one is that the Jazz were so close to choosing Parker.

The Jazz knew that John Stockton’s career was coming to an end, so they were in the market for a young point guard. With the 24th pick in the 2001 NBA Draft, the Jazz had two strong options. Raul Lopez and Tony Parker.

The Jazz picked Lopez. Parker was taken by the Spurs only four picks later.

Raul Lopez only lasted 113 games in the NBA. Not even two full seasons.

In contrast, Tony Parker played 1,254 NBA games. He won four titles. He was named an All-Star six times. He even won a Finals MVP award. Parker has his jersey hanging from the rafters in San Antonio. 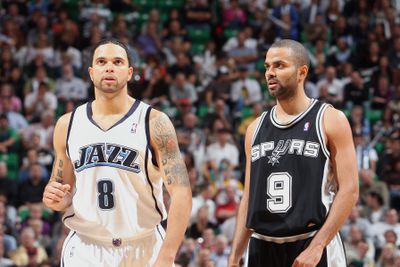 In the parallel universe in which Utah chose to draft Parker, do the Spurs still have their dynasty? What comes of the Jazz? If Parker was that he could be a franchise point guard, maybe the Jazz don’t pick Deron Williams in 2005? It’s hard to say though because it was almost universally agreed upon that Williams and Chris Paul were the best choices at that point in the draft. Maybe the Jazz just go with the best player available, and still take their favorite, D-Will. Then there’s a competition for the starting point guard role. Maybe Williams gets traded early in his career for another star to compliment Parker and Boozer? Maybe Parker is traded instead?

There are many intriguing directions this scenario could go, but all of them would cause significant changes to the 2000s and 2010s eras of Jazz basketball. Who knows, maybe a number 9 Parker jersey could be hanging from the rafters of the Vivint Smarthome Arena.


There are so many more ‘what ifs’ we could go through. What if the two infamous shot clock calls in Game 6 of the 1998 Finals were called correctly? What if Utah drafted Chris Paul instead of Deron Williams? What if Mike Conley made the buzzer-beater in Game 7 against Denver? We could go on and on. 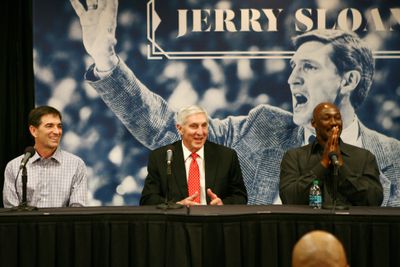 We live here, in the reality where the Utah Jazz have statues of Karl Malone and John Stockton outside their arena. There have been plenty of fun years and good memories. Unfortunately, though, there haven’t been any championships. I wonder, if Jazz fans could change reality, would they?