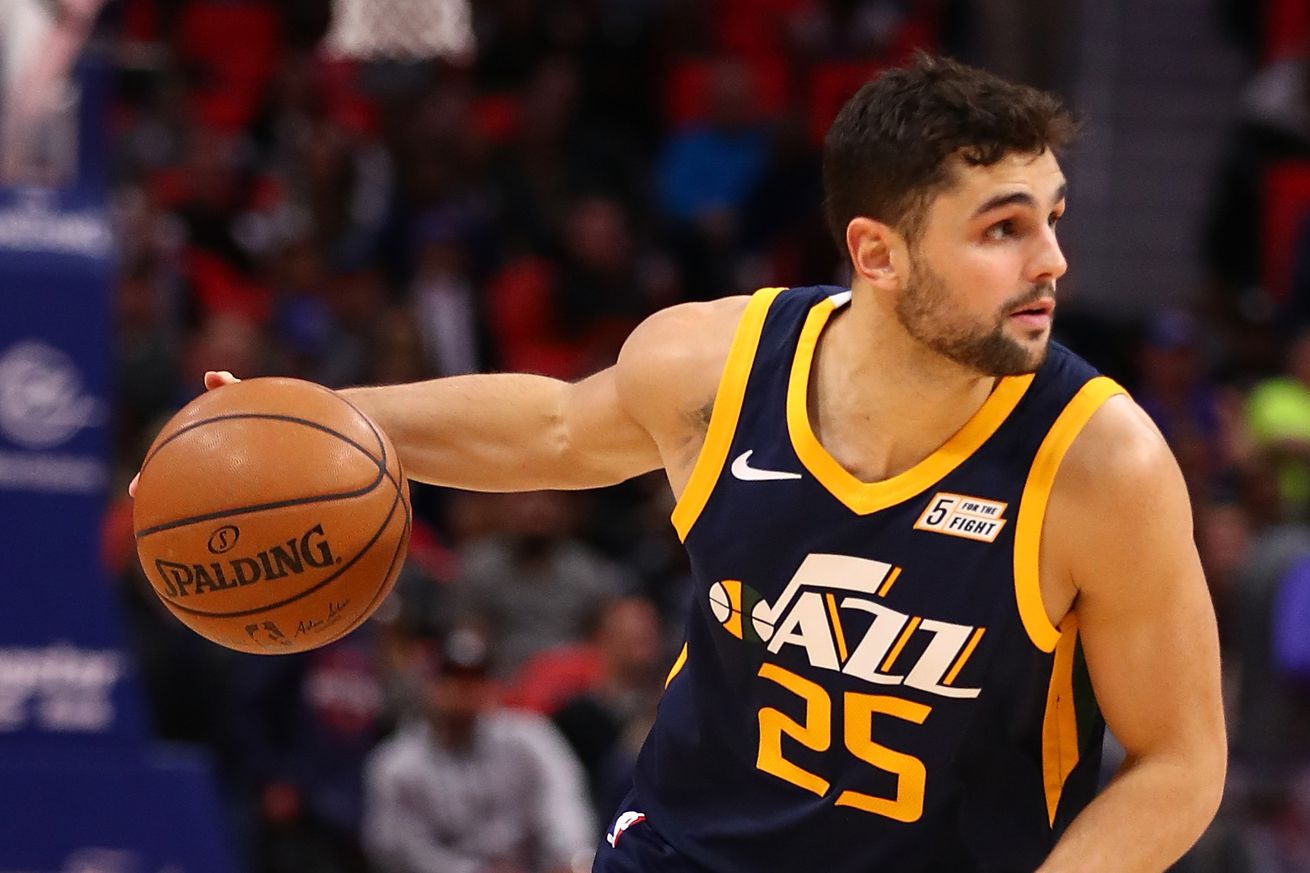 The Utah Jazz announced that Raul Neto had an MRI that revealed a fractured wrist.

This is a potentially tough loss for the Jazz with a bench unit that has struggled to score over the last few games. Neto’s 4.6 points and 1.8 assists were a spark plug for the team and will need to be found in other places.

In the Jazz’s next 5 games their toughest opponent will be the Detroit Pistons which means the injury may not hurt them too much, especially if Dante Exum returns soon.

Okafor snagged a defensive rebound then ran the full length of the court for a two-handed dunk as the Jazz trailed 57-66 with 4:59 left in the third.

But then the flip switched.

A driving layup by Donovan Mitchell led to 15 third-quarter points.

There was a jumper here, a hanging reverse shot there, a driving dunk and an array of other finishes as the rookie guard posted 25 of his 27 points in the second half to help the Jazz beat the Pelicans, 116-99.

“The good thing about having teammates like this is Joe (Ingles) and Ricky (Rubio) just telling me to keep being aggressive and just keep going,” said Mitchell, who posted 18 straight points at one point. “In the second half, you get down, your mindset starts changing a little bit and we all understood as a team how much this game meant.

“Obviously we felt the atmosphere and the vibes, so we came out and tried to compete in the second half even though we were down.”

Utah has now won six consecutive games, 11 straight on the road and 18 of their last 20 overall games while fighting for a playoff spot in the Wild Wild Western Conference.

“I think when you think about Ricky over the course of the season and the progress he’s made as far as his comfort level before All-Star break and that two or three game period where he was out, you wonder if it’s going to affect his rhythm,” said Jazz coach Quin Snyder. “He got back into it. He almost got a triple-double. We’ve talked...
Continue...
Davis: I'm assuming he'll play vs. Utah
0 368 by Google News - Utah Jazz : Mar 10, 2018 at 10:13 AM
The New Orleans Pelicans are hoping All-Star forward Anthony Davis can play Sunday (March 11) against the Utah Jazz, and they'll be more than happy to add him back to the lineup. Davis sat out of the team's 116-97 thrashing by the Washington Wizards on Friday night (March 9) due to a sprained left ... Donovan Mitchell throws down a fourth quarter slam worthy of the dunk champion in the Jazz’s 95 to 78 win in Memphis, Utah’s 17th victory in 19 games. (The Canadian Press)

Story of the Game

In perhaps the most predictable result of the NBA season, the Utah Jazz, winners of 17 of their last 19 games, defeated the Memphis Grizzlies, losers of 15 straight, 95 to 78, holding the Grizzlies to a season-low score on their home court.

Since 2011, games between these two teams have resulted in the lowest combined point total of any two teams in the league. So the final score was no surprise.

It really took only one strong quarter for the Jazz to establish a lead Memphis simply lacked the firepower to overcome, and that proved to be the second quarter. In the period Utah made five of 11 threes, two each by Jae Crowder and Joe Ingles, while holding Memphis to 30-percent shooting without a single triple. By quarter’s end, Utah held a 12-point lead that would never be threatened.

The Grizzlies simply lacked the scoring punch to challenge Utah’s defense, which held the home team to 55 points on 35-percent shooting over the final three quarters. Marc Gasol’s (9 points, 11 rebounds, 6 assists, 4 blocks) strange absence from the Memphis offense played a major role in this futility. The Grizzlies’s best player – honestly, the only player on their roster who measures up as a quality NBA starter in the absence of the injured Mike Conley – tied Kobi Simmons (???) for the fewest shots among the home team’s starters. Perhaps that can be attributed to the impact of Rudy Gobert (4 points, 10 rebounds, 1 assist, 2 steals, 2 blocks).

The all-league centers largely cancelled each other out, and pitting their supporting casts against each other was an easy win for Utah – just not an...
Continue...
3 keys in the road win over Indiana
0 435 by Deseret News - Jazz : Mar 7, 2018 at 7:32 PM

INDIANAPOLIS — The Utah Jazz picked up a convincing 104-84 road win over the No. 4 team in the Eastern Conference, the Indiana Pacers, on Wednesday at Bankers Life Fieldhouse.

Turning point: After the Pacers closed within 72-65 with 1:38 left in the third quarter, Utah scored seven of the final 11 points of the period and opened the fourth with a 15-2 run to take a commanding 94-71 lead.

The heroes: Rudy Gobert posted a double-double with 23 points and 14 rebounds, while Donovan Mitchell led four other Jazzmen with double-digit points with 20 for the rookie.

Jazz almanac: 35-30, Won 4
Playoff picture: The Jazz currently sit a half-game back of Denver for the No. 8 seed in the Western Conference. The Nuggets play Cleveland later Wednesday.