Go To The Forums
Loading...
Handing reins to Mitchell
1 325 by Google News - Utah Jazz : Mar 2, 2018 at 10:42 AM
Donovan Mitchell was in his hotel room in Utah when everything changed. The Jazz rookie was resting before the next day's summer league game, his mother, Nicole, and younger sister, Jordan, nearby. He had already started turning heads, the latest showing a 23-point performance against San ...

If garnering NBA Rookie of the Month honors is an indication of how voting for Rookie of the Year will go, Utah's Donovan Mitchell and Philadelphia's Ben Simmons are indeed the frontrunners for the award.

The pair received the honors for the month of February on Thursday for the Western and Eastern Conferences, respectively. It is the third time each has won it this season, with it being the third straight month for Mitchell (Boston's Jayson Tatum won it for the East in December. Los Angeles forward and former University of Utah star Kyle Kuzma did for the West in November).

For the year, the Louisville product leads rookies in scoring at 19.6 points per game and is also averaging 3.5 assists, 3.5 rebounds and 1.5 steals. His 137 3-pointers is the most by a first-year player through their first 60 games in NBA history.

Mitchell is the second player in franchise history to win Rookie of the Month honors three times in a season, as Trey Burke also did so during the 2013-2014 campaign.

SALT LAKE CITY — It’s highly unlikely that Utah Jazz forward Thabo Sefolosha will be returning to the lineup this season.

The injured forward is technically listed as being out indefinitely, but after suffering a torn MCL in his right knee he’s very likely to sit for the remainder of the year.

Sefolosha, 33, isn’t allowing himself to be defeated by the injury, though.

The league veteran was spotted during Wednesday’s practice in a thick black knee brace, his customary Nike Air Max 90 sneakers and a huge smile on his face.

He even shot free throws, without crutches, on the far end of the practice facility with teammate Derrick Favors and Jazz assistants Antonio Lang and DeSagana Diop.

There is still no timetable on Sefolosha’s return.

He originally underwent surgery on Jan. 17 with team physician Dr. Travis Maak, but he's making progress. He now spends most of his time in the training room getting treatment, but it was good to have him around.

“Some of the things we miss about Thabo are the things that happen between plays,” said Jazz coach Quin Snyder. “His voice, his experience. He added a lot to our team from a leadership standpoint, so to the extent that he’s doing better, he’s here and having his support and leadership there’s only so much you can do when you’re not playing but his energy is really good.”

Before going down, Sefolosha was averaging 8.2 points and 4.2 rebounds while...
Continue...
FiveThirtyEight Predictions: Jazz out of the playoffs
0 482 by Jared Woodcox : Feb 27, 2018 at 8:02 PM
Despite the Utah Jazz’s playoff odds soaring through the roof before the All-Star break, the latest FiveThirtyEight projections now have them falling short. The Utah Jazz were flying high prior to the All-Star break as they strung together an incredible 11-game winning streak. Unfortunately, they’ve come back down to earth in a big way since […] 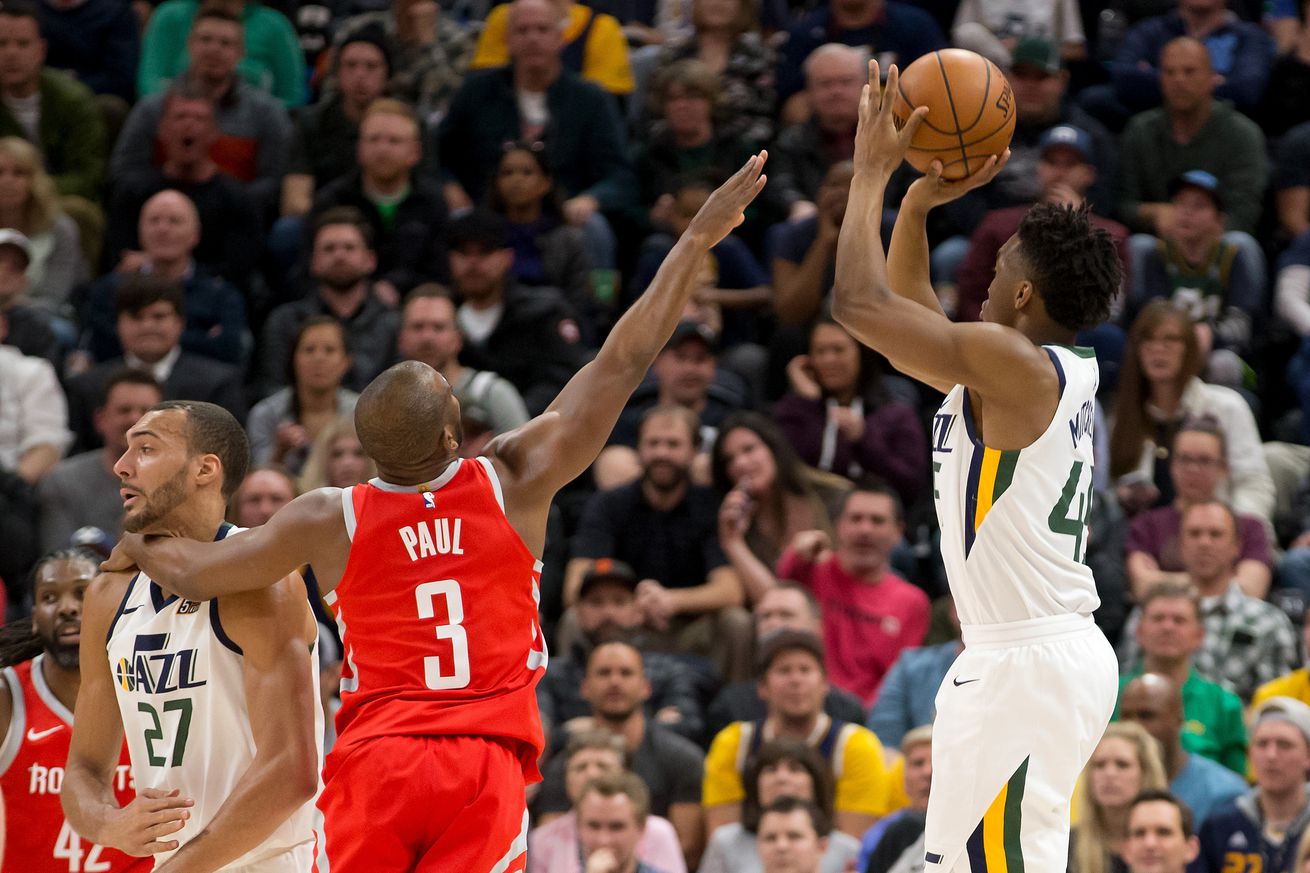 Bad turnovers and bad shooting do in the Utah Jazz

The Utah Jazz missed out on a big opportunity to upset the Houston Rockets Monday night with the Rockets missing Ryan Anderson, Clint Capela and Eric Gordon. But with 22 turnovers and a combined 24% from three, the Jazz couldn’t get the upset against the best team in the league.

Defensively the Jazz did a nice job holding James Harden to 1/5 from three and 26 points and Chris Paul to only 15, but it was their inability to make good passes and hit open shots that did them in.

Probably the best players for the Jazz were Ricky Rubio and Rudy Gobert who had the best plus/minus of all the starters.