Al-O-Meter said:
To the point of passing societal gun control legislation, I’d say ‘Shooter A’ or ‘Shooter B’ being more at fault in that unfortunate event is irrelevant. Self Defense is a natural right, meaning it preexists government. Buffalo with no government at all are allowed to defend themselves and their calves against lions (and alligators). Government does not give one the right to self defense.

When government tries to take away that right to self defense, how Californians have reacted shows that otherwise good, law abiding people will become criminals rather than surrender that natural right. If gun control legislation worked then those areas with the strictest gun control laws would be the most peaceful. In reality we see the exact opposite.

I’m all for education. I just think the best place for education is in a school. Schools have Sex Ed and Drivers Ed. Neither of those is even a right.
Click to expand...

Well you're new here, so you are not aware that I have strongly advocated that in a nation with a 2nd Amendment like ours that there needs to be some basic firearms training in schools. Start early with a basic safety course. Then begin talking about Rules of Engagement with a firearm, when you are allowed to carry, when are you not, what is justification from brandishing, under what conditions do you have justification for the use of deadly force. Then finally hands on firearms training involving a gun range.

I'm not in any way shape or form advocating for taking away a person's right to self defense.

I'm also not in California anymore, so I'm not going to talk about their laws as they don't pertain to me and I'm not well versed in them.

I think we need clear "rules of engagement" for people who choose to carry a firearm (open or concealed). It needs to be as clear as possible when you are justified in using deadly force. For instance, I would say that if you pursue confrontation or conflict as opposed to maintaining a defensive disposition, or intentionally instigate a violent confrontation you do not then have the right to pull a gun and shoot a person who responds to your aggression.

Al-O-Meter said:
If gun control legislation worked then those areas with the strictest gun control laws would be the most peaceful.
Click to expand...

This seems so obviously false on so many levels, I have trouble thinking you intended it as anything other than an empty, rhetorical flourish. Did you actually mean it?

Wild west shootout ensues. I believe only one of these men was injured, but they could have both died.

Who was justified and who was not justified?
Click to expand...

To be frank, were I to assign fault, it would be the person who 1) refused to call the authorities when there was no immanent danger, and 2) actively pursued people.

One Brow said:
This seems so obviously false on so many levels, I have trouble thinking you intended it as anything other than an empty, rhetorical flourish. Did you actually mean it?
Click to expand...

Sionce you obviously went well beyond saying there was reverse-correlation, and I did not quote the part where you stated there was a reverse correlation, that's pretty obviously not what I was questioning.

Even then, some people find positive correlations and others negative. It's hardly open-and-shut.


Al-O-Meter said:
That is especially clear when you remove suicides from firearm deaths, which have a strong positive correlation.
Click to expand...


Al-O-Meter said:
You could make a case that I have cause and effect backwards but the relationship in the data is undeniable.
Click to expand...

Much more likely is that any cause-and-effect is remarkably minor when compared with other causes.

Contributor
2018 Award Winner
2020-21 Award Winner
This is a prime example of a person who instigated a confrontation with an elevated level of confidence because he's carrying a gun. Then he believes he has found his dream scenario of justification for deadly force.

This is a person who was seeking justification to kill a person and had a history of instigating confrontations.

It needs to be made clear that when you instigate a confrontation you surrender your right to use deadly force. If the victim had actually moved forward this murderer would likely have gotten away with murder. The man did not move forward, he was moving back.

Contributor
2018 Award Winner
2020-21 Award Winner
Here is an article about the neighborhood watch vs father. I had some details wrong. I based my post on my recollection of an event that happened more than 10 years ago. 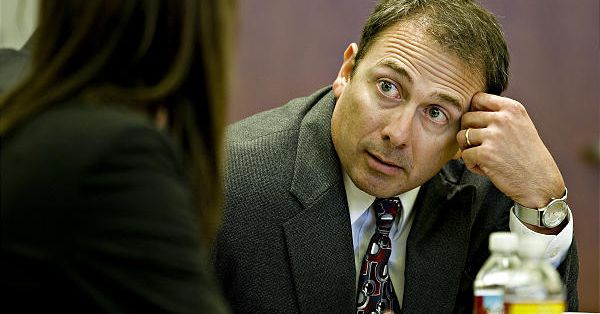 As Paige Campos watched a court bailiff shackle the wrists of her father, there wasn't time to say anything. But she made sure the love she has for him showed.

Anyway, based on the video I posted above and in this case I feel VERY strongly that a standard nation wide set of rules of engagement need to be established for civilians who carry firearms. The line where brandishing is justified and the line where deadly force is justified need to be as bright and clear as possible.
You must log in or register to reply here.