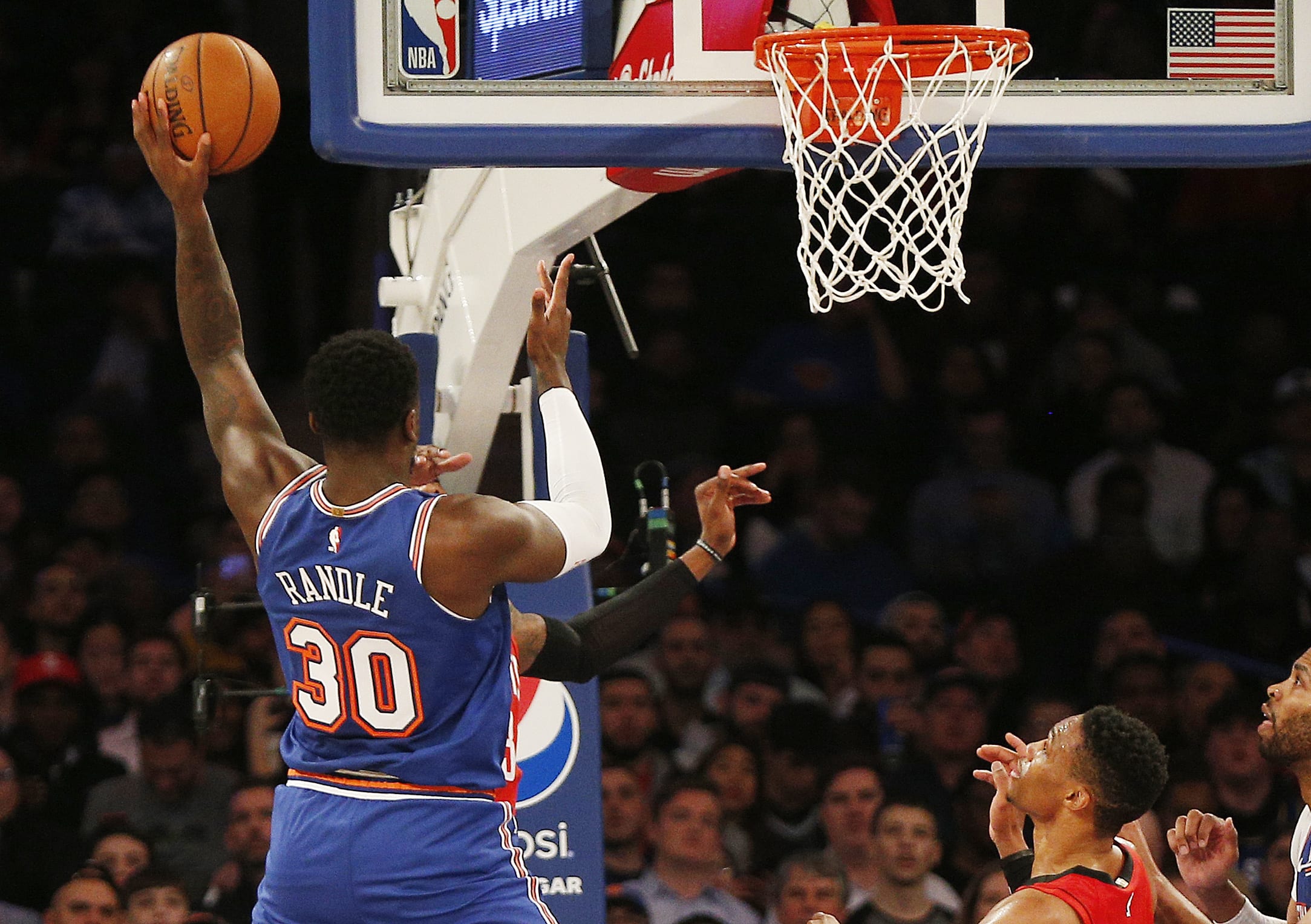 
According to Knicks Fan TV, the New York Knicks‘ number one offseason priority is trading Julius Randle, and the Utah Jazz are a potential buyer.

“Number one priority this offseason for the Knicks will be trading Julius Randle. They are going to look to trade Julius. And the first trade rumor that I’m hearing is Julius Randle to the Utah Jazz for Mike Conley and draft considerations.”
Click to expand...

Randle, 25, is one season through a three-year, $62 million contract with the Knicks. Randle averaged 19.5 points and 9.7 rebounds per game while shooting 46.0 percent from the field this season.

The Knicks could have upwards of $40 million in cap space this offseason depending on what they do with the handful of team options they hold on veteran players (Bobby Portis, Taj Gibson, Elfrid Payton, Wayne Ellington and Reggie Bullock). A Randle-for-Conley trade would add roughly $13 million in payroll for the Knicks next season.

Conley, 32, would presumably become new Knicks head coach Tom Thibodeau‘s starting point guard. They could subsequently select a wing/forward such as Florida State’s Devin Vassell or Auburn’s Isaac Okoro, who each reportedly interest the Knicks, with the eighth pick in this year’s NBA Draft. New York also owns the 27th and 38th selections in the upcoming draft.

From Utah’s perspective, Randle could start in-between a healthy Bojan Bogdanovic and Rudy Gobert or serve as the team’s sixth man. They could then pursue a lead guard in the offseason to start next to Donovan Mitchell. The Jazz lost to the Denver Nuggets in seven games in the first round of the NBA playoffs this season.


I don't know if this is BS or not, but given that Walt Perrin and Johnnie Bryant both left the Jazz to join the Knicks in the past two months - it could have some weight to it. Though, it should be pointed out that Mike Conley's $34.5 million dollar salary and Julius Randle's $18.9 don't exactly match. They only need to get within 15%, but what I think would work is:

Why does Utah do it?

1. The Mike Conley chemistry with Donovan Mitchell never materialized. Mike never looked like himself in the Jazz system and clearly needs the ball more to be effective.
2. The Jazz need more bench depth, more defense, more rebounding and more athleticism. This deal addresses 3 team problems by moving one player.
3. Julius Randle is the crux of this deal, he's a two-way player and former teammate of Jordan Clarkson's. He's a decent shot blocker, but what would excite the Jazz about a guy like him is his ability to get steals and immediately put the ball on the floor and run down for the dunk. When players hesitate (even for a second) posting up against Randle, he gets his hands on the ball and initiates a fast break. With Gobert at his back and Donovan Mitchell at his side, this is going to become a deadly defensive play in the Jazz arsenal.
4. Why does Utah want Taj Gibson? Taj is a savvy vet who shot 59% EFG from the floor, he's got a long wing span (6'9" w 7'4" wingspan) and can play the 4 or 5 as a backup.
5. Frank Ntilikina is from FRANCE. He's 6'4" with a 7'1" wingspan. DL historically loves to pursue guys with long wingspans.

5B. He's never really had a coach/system to help him develop. In his 3 years with the Knicks, he played for 3 different head coaches.
5C. He only shot 32% from behind the arc, but shot 86% on free throws - that usually means his stroke is pure. If he is taking open looks in Utah's system as opposed to having shoot over defenses - it could be a huge difference maker for him, not to mention Utah has the best screen-assist guy in the NBA vis-a-vi Rudy Gobert.
5D. His D. He already averages just under 1 steal per game in only 20 mpg.

6. The Jazz get 2 draft picks sort of close together and one is a non-guaranteed contract. They also still have veterans MIN contract and MID-LEVEL exception at their disposal.


Why does New York do it?

1. Mike Conley is the ultimate professional, sportsman and leader. If you are rebuilding there is no one better in the NBA for your locker-room or to groom your new players into becoming consummate professionals.
2. It clears a ton of cap space for them - to pursue free agents this summer and next - which is NYs preferred method of rebuild. Especially with 2021 free agents possibly including: Jason Tatum, Blake Griffin, Victor Oladipo, Paul George, Kwahi Leonard, Lebron James, Kyle Kuzma, Giannis Antetokounmpo, Jrue Holiday, De'Aaron Fox. NY wants to take a swing at some of these guys.
3. Coach Tom T has had issues with players and attitudes in the past, having a locker room leader like Mike Conley will help things run smoothly. He could be the difference between making the playoffs or not in the Eastern conference, and that could be a big difference when it comes to recruiting free agents.
4. Taj Gibson is 35 years old, and they are rebuilding.
5. The Knicks picked Frank Ntilikina ahead of Donovan Mitchell and he averages 6.0 ppg - he is the most hated player on the roster. Moving him would also allow the Knicks to see what exactly they DO have with the remaining guards on their roster playing Mike Conley with Dennis Smith Jr. at the 2 guard, and RJ Barrett at the 3 spot.


Assuming the Jazz make NO other trades, and use their MIN and MLE, the roster could look like this:

Use the MIN - on Aron Baynes, and the MLE on either Mo Harkless, Jerami Grant, or Derrick Jones Jr. - the best two-way athlete you can get. Someone who could back up Bogey, but also play alongside him for stretches.

NY could simply waive Gibson, Ellington, and/or Payton so they don't have to include them in the deal. I don't see us having interest in any of these guys at these numbers.

So for me, the trade would be:

Conley and #23 for Randle and Ntilikina

I've always been interested in Randle because of his wingspan and handle and I think he would fit well with Rudy. My issues with the above scenario are having Frank Ntilikina as the starting SG and I'm not sure Baynes only gets the minimum.

toddychurch said:
I've always been interested in Randle because of his wingspan and handle and I think he would fit well with Rudy. My issues with the above scenario are having Frank Ntilikina as the starting SG and I'm not sure Baynes only gets the minimum.
Click to expand...

At the first stoppage at the 8 minute mark, bring in Ingles for Randle sliding Bojan to PF. At the 4 minute mark, bring in Randle at C with the small ball approach. Clarkson and Ntilikina come in for Don and Royce. Somebody (MLE, Morgan, Brantley, Oni, Niang) from the bench gives Bojan a rest.

"and draft considerations" is my favorite part... Utah's stuck, perpetually buying high and selling low when it comes to PG's...

2019 Award Winner
I hate this trade... we get the worse player... the worse contract... and give draft comp. nah gtfo

Handlogten's Heros said:
I hate this trade... we get the worse player... the worse contract... and give draft comp. nah gtfo
Click to expand...

Worse player after watching how Conley didn't fit and we had glaring issues at backup PF/C? Debatable

$15.6 million in savings for the 20-21 season is pretty dang substantial and should not be overlooked.

The Knicks are under the cap so they don’t have to match incoming salary, and the short-term salary savings is probably the biggest reason to even consider it.

Handlogten's Heros said:
I hate this trade... we get the worse player... the worse contract... and give draft comp. nah gtfo
Click to expand...

Morons keep perpetuating the Mike Conley didnt fit myth seem to only remember the first half of the season.

LoPo said:
Worse player after watching how Conley didn't fit and we had glaring issues at backup PF/C? Debatable

$15.6 million in savings for the 20-21 season is pretty dang substantial and should not be overlooked.
Click to expand...

Actually it's fairly insignificant. If the Jazz re-sign Clarkson at 12 mil a year and do that trade, they still have 0 cap room.

LoPo said:
Worse player after watching how Conley didn't fit and we had glaring issues at backup PF/C? Debatable

$15.6 million in savings for the 20-21 season is pretty dang substantial and should not be overlooked.
Click to expand...

I thought Randle's final year was fully guaranteed... it is not... but it is another $4M after next year to waive him.

Conley is a better fit than Randle would be and the more useable player. Randle is a clunky fit for us and many other teams. If we decided to do it straight up and had a place to use the trade exception we'd generate then maybe I could understand it. The savings are only valuable if you find a home for that trade exception because we will be over the cap.

Mikes a better fit as a starter or with the bench than Randle is.

I don't see the need for us to add a draft pick.

I also don't see us adding Randle AND Favors.

Conley for Randle makes sense on a lot of levels for both teams but it is not my perfect trade. Randle brings more toughness and rebounding. Plus he does a better job than Favors at stretching the floor. But Randle isn't the defensive presence that Favors was.

My favorite part of a trade like this is that it moves Donovan to starting point guard which makes us bigger and more dynamic IMHO. We went 2 - 1 against the Nuggets with Donovan no Conley. Then 1 - 3 against the Nuggets with Conley. Just saying I think the team was harder to guard with the ball in Donovan's hands more...
You must log in or register to reply here.