Donald is about to go through some things...

Al-O-Meter said:
Did Trump have an old issue of the Washington Post from April 1979 in which they published that information?

Great tongue-in-cheek piece. I am sure it is exactly like the classified documents at question today. Probably word for word, right?

The best way to avoid inhaling plutonium is to hold your breach while handling it. If this is too difficult, wear a mask. To avoid ingesting plutonium orally, follow this simple rule: Never make an A-bomb on an empty stomach. If you find yourself dozing off while you're working or if you begin to glow in the dark, it might be wise to take a blood count.
Click to expand...

And now we know why Trump took those documents home, he was trying to keep the IRS away!!

Many families are attracted to the H-bomb simply as a deterrent . A discreet sticker on the door or on the living room window saying "This Home Protected, by H-Bomb" will disccurage IRS investigators, census takers and Jehovah's Witnesses.
Click to expand...

LogGrad98 said:
Great tongue-in-cheek piece. I am sure it is exactly like the classified documents at question today. Probably word for word, right?

And now we know why Trump took those documents home, he was trying to keep the IRS away!!
Click to expand...

Did… He think it was serious? Wait till he finds out that the Colbert Report was satire and that he really wasn’t really dancing with the Death! 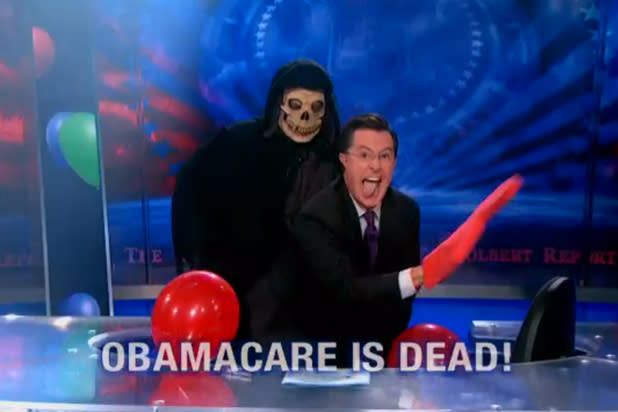 Stephen Colbert celebrated the potential end of Obamacare on Thursday’s “Colbert Report” with his best Miley Cyrus impression, foam finger and all. 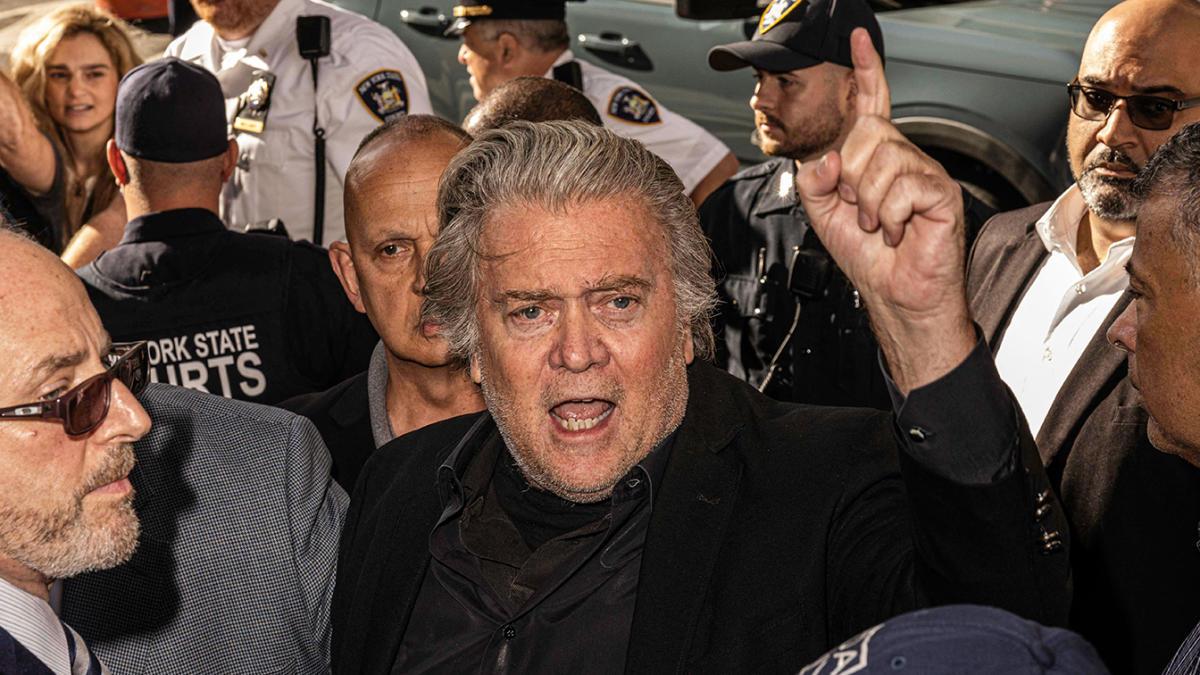 The former Donald Trump aide was expected to face new state charges related to a fundraising scheme to build a private border wall along the U.S.-Mexico border.

The Washington Post was first to report that Bannon, who was convicted in Washington, D.C., federal court last month of criminal contempt of Congress, had been indicted on state charges Tuesday night. The new state charges were expected to mirror those in a federal indictment from 2020 that alleged that Bannon and other associates defrauded We Build the Wall donors.

Bannon pleaded not guilty to federal fraud charges in that earlier case, before receiving a last-minute pardon from Trump on his way out of the White House.

But presidential pardons only apply to federal charges and do not preclude prosecutions at the state level. Shortly after Trump pardoned Bannon, the Manhattan District Attorney’s Office began investigating his alleged involvement in the border wall scheme.

"Trump never found a way to escape the antisocial demons that haunt him. But here’s what turned a personal tragedy into a national calamity: He imprinted his moral pathologies, his will-to-power ethic, on the Republican Party."

Pointing out that the Republican Party he joined stood for law and order and moral values, the columnist claimed the current iteration has thrown it away because of their "... fealty to Trump despite his ceaseless lying and dehumanizing rhetoric, his misogyny and appeals to racism, his bullying and conspiracy theories."

"Something malicious has occurred since Trump won the nomination in 2016. Six years ago, Republicans jettisoned their previous moral commitments in order to align themselves with the MAGA movement. Today, they have inverted them. Lawmakers, candidates, and those in the right-wing media ecosystem celebrate and imitate Trump’s nihilism, cynicism, and cruelty,"

This is the result of individuals’ and institutions’ accommodation of one moral transgression after another after another. With each moral compromise, the next one—a worse one—becomes easier to accept. Conduct that would have horrified Republicans in the past now causes them, at best, to shrug their shoulders; at worst, they delight in it."

Worse still, he suggested, the Republican Party has grown worse since he lost the 2020 presidential election as a faction "has gotten more radicalized, more aggressive, and more conspiracy-minded."

According to Wehner, it's time for mainstream Republicans to set about destroying the MAGA Republicans and get the party back to its roots.

I am suggesting that much of MAGA world is authoritarian; that Liz Cheney is right to turn all her political energies to opposing it; and that containing and defeating MAGA—not hoping it will change, not placating its grievances—is now the No. 1 priority for friends of democracy,"

Fake news. The deep state is out to get Bannon. Biden called me a semi-fascist all because I hate democracy and wanted to hang Pence for not overturning the 2020 election. I’m angry! Wah wah

Unreal. What are we even doing here?

The Thriller said:
Unreal. What are we even doing here?

I loved this from the comments: Government representative honors woman who tried to violently overthrow the government.

The “was it a russian flag?” comment was also good. 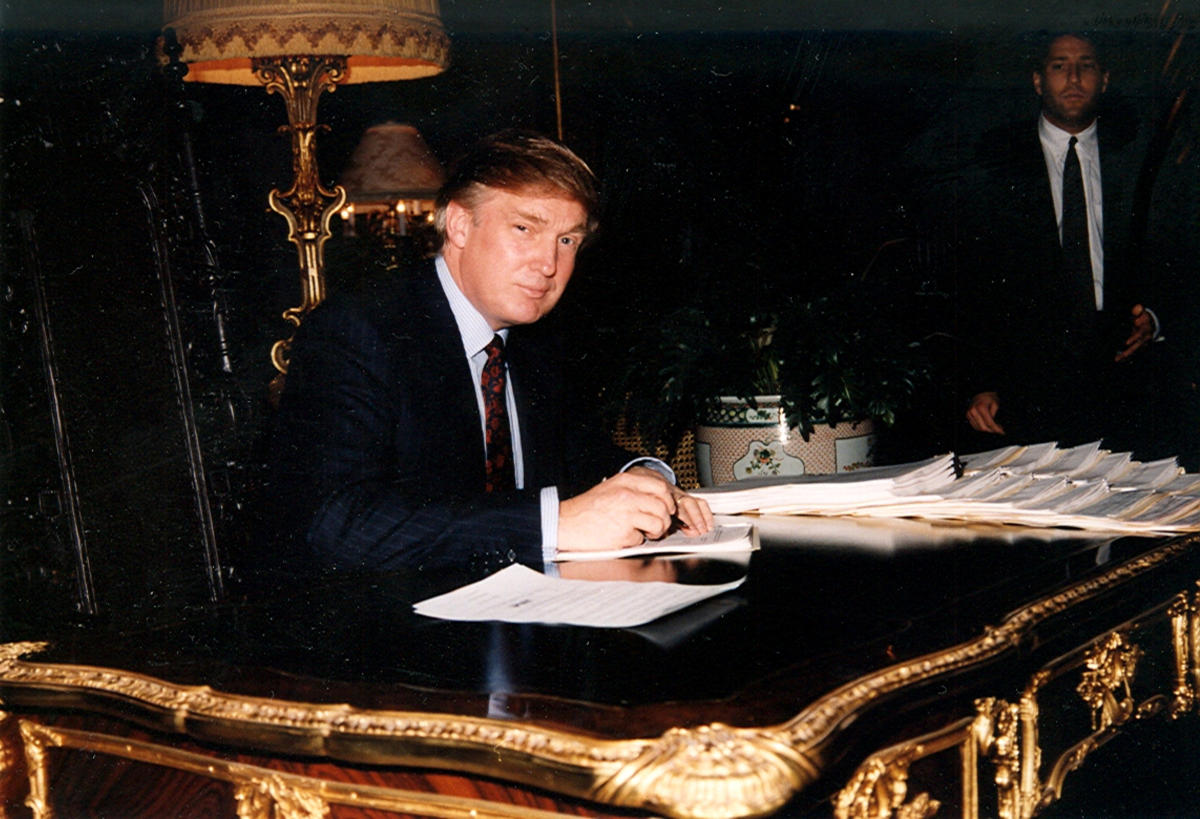 Trump has a long and rocky relationship with the public markets

It was back in 1995 that Donald Trump bought 40 Wall Street located steps from the New York Stock Exchange. The building has proven to be the former president’s most durable connection to public markets by far — much more so than his companies themselves.

This was not the first time Trump courted Wall Street. He led a public company beginning in 1995 when Trump Hotels and Casino Resorts began to trade under the ticker DJT.

“This is such a big day for us, it’s the New York Stock Exchange,” Trump said at the time.

DJT's stint on the exchange quickly soured, with its stock falling below its IPO price by 1997. Seven years later, the company was bankrupt and delisted from the exchange.

Trump's questionable business practices may have precipitated that downfall.

In 2016, the Washington Post looked into how, despite losing money every year, the company paid Trump handsomely and apparently shifted funds and assets between his public and his private business in ways that benefited him greatly but undermined his shareholders. Forbes also reported on that period and found that it “didn’t take long for Donald John Trump to betray his shareholders.”

The SEC also brought a case — which was later settled — alleging Trump’s company misled investors on an earnings report.

This year's SPAC drama echoes that time. DWAC has also lost money for retail investors and Trump fans over the last year. The stock hit an all-time high of $94.20 when interest in the company peaked; by Friday morning, it was trading at around $23 per share.

Historically, Trump’s private organizations have faced consequences from a $2 million judgment against Trump’s foundation to a $25 million decision against Trump University. And last month, the Trump Organization’s long-time chief financial officer, Allen Weisselberg, pleaded guilty to fraud ahead of a criminal trial set for next month being prosecuted by the Manhattan District Attorney.

Meanwhile, New York Attorney General Letitia James has her own civil probe into Trump and his business.

But Trump’s media company could be different. Truth Social — which Trump launched when he was kicked off Twitter in the wake of the Jan. 6, 2021 Capitol attack — is facing reports of serious financial difficulties, according to both Fox Business and Axios.

Trump told lenders in 2012 that 40 Wall Street was worth $527 million, according to the Washington Post. But then he reportedly told tax officials it was worth less than one thirtieth of that: $16.7 million. That's the kind of about-face that might not be possible with shareholders to answer to.

I agree with this comment i saw in the responses: Bankers Boxes are one of the most common types of these boxes.

I believe the absolute worst about TFG. But seeing a Bankers Box in two different pictures doesn't make a connection on their contents to me.

fishonjazz said:
I agree with this comment i saw in the responses: Bankers Boxes are one of the most common types of these boxes.

I believe the absolute worst about TFG. But seeing a Bankers Box in two different pictures doesn't make a connection on their contents to me.

Agreed. I have about 20 that look just like this. None of them have top secret nuclear codes or anything. I promise. Sometimes we reach a level of paranoia that keeps us from seeing what's really going on and keeps us jumping to useless conclusions. Sometimes a bankers box is just a bankers box.

I loved this from the comments: Government representative honors woman who tried to violently overthrow the government.

The “was it a russian flag?” comment was also good.

I mean, they’re making Jan 6 a great and glorious day. People died. People who should be alive today. If we saw Jan 6 playing out in another country, we’d think that country was coming apart at the seams. Yet… these guys just seem hell bent on glorifying that which should be shunned.
You must log in or register to reply here.